US federal government reinstates $US 929m for California high-speed project

The funding was rescinded by the Trump administration in May 2019. 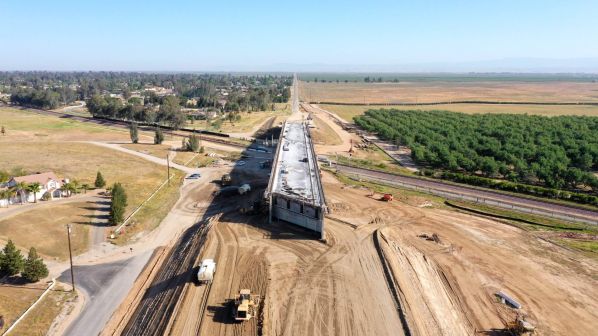 THE United States federal government has reinstated nearly $US 929m in funding for the California High-Speed Rail Authority (CHSRA), which was rescinded by the administration of former president, Mr Donald Trump, in May 2019.

The US Department of Transportation (DoT) and the state of California finalised the settlement on June 11 following months of negotiations.

“The US Department of Transportation (DoT) and the State of California have reached a final settlement to resolve the litigation over the Federal Railroad Administration’s (FRA) termination of its Fiscal Year 2010 Cooperative Agreement with the California High-Speed Rail Authority (CHSRA),” says FRA deputy administrator, Mr Amit Bose.

The FRA terminated a 2010 agreement in May 2019, withdrawing $US 928.6m in grant funding for the Central Valley section of the line, saying CHSRA has repeatedly failed to comply with the terms of the agreement and has failed to make reasonable progress on the project. This followed an announcement from Newsom in February 2019 that the project would be scaled back to just the Merced - Bakersfield Central Valley section due to spiralling costs and poor project oversight.

“This settlement agreement follows intensive negotiations between the parties and reflects the federal government’s ongoing partnership in the development of high-speed rail,” Bose says. “It also underscores CHSRA’s commitment to deliver this transformative infrastructure project. The department is excited about re-establishing this important relationship with the state of California and is committed to fulfilling its oversight responsibilities. This settlement is an important step in advancing an economically transformational project in California.”

“Tonight’s action by the federal government is further proof that California and the Biden-Harris administration share a common vision - clean, electrified transportation that will serve generations to come,” says California governor, Mr Gavin Newsom. “Restoring nearly $US 929m in grant funding back to California’s High-Speed Rail project will continue to spur job creation, advance the project and move the state one step closer to getting trains running in California as soon as possible. We thank the Biden-Harris Administration and secretary [of transportation, Mr Pete] Buttigieg for their partnership on this important step forward.”

Originally envisaged as a 1290km network connecting San Francisco with Los Angeles and Anaheim, with extensions to Sacramento and San Diego in a second phase, construction is currently underway on the initial 191km section in the Central Valley between Madera, Fresno and Bakersfield.

In February, CHSRA reported that construction on the first 35.4km segment through Kern County is expected to reach “substantial completion” in about 15 months. Construction on a 51.5km stretch between Avenue 19 in Madera County and East American Avenue in Fresno County, and on approximately 96.5km from East American Avenue to 1.6km north of the Tulare-Kern County line, will take CHSRA into 2023.

For detailed data on high-speed projects in the US and around the world, subscribe to IRJ Pro.