Plan aims to improve safety, capacity and connectivity on a 996km section of the North-South railway. 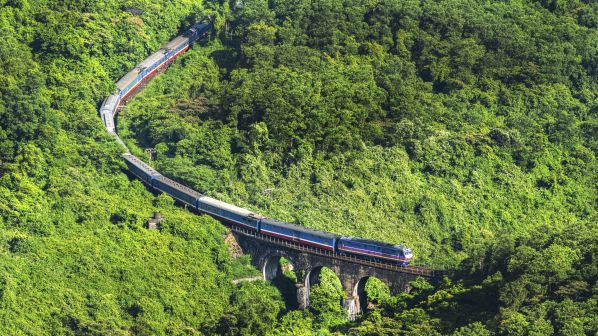 VIETNAM’S Ministry of Transport has approved a Dong 1.2 trillion ($US 51m) renovation and upgrade project for the 996km Vinh - Nha Trang line which forms part of the country’s North-South Railway.

The Railway Project Management Board, under the Ministry of Transport, has been assigned the role of investor in the project to upgrade bridges and stations along the route, which was built to the metre  gauge used across the greater part of the country and which is a legacy of Vietnam’s French colonial past.

While project capital will be provided from the state budget under the medium-term public investment plan for the period 2021-25, the provinces and cities of Nghe An, Ha Tinh, Quang Binh, Quang Tri, Thua Thien-Hue, Da Nang, Quang Ngai, Binh Dinh, Phu Yen and Khanh Hoa will carry out the day-to-day management of the project.

The project aims to improve the safety and quality of rail service, increasing capacity and making the railway more attractive to passenger and freight customers by making better use of the railway infrastructure along the route.

There are several sections of line where encroachment by city populations leaves very little clearance between trains and temporary structures erected along the line, so part of the improvement plan involves compensation, site clearance and resettlement support at a cost of Dong 27.6bn. This will be divided into sub-projects carried out by the Provincial People’s Committees of Ha Tinh, Quang Binh, Da Nang, Quang Ngai and Binh Dinh.

The North-South Railway is currently the only rail route connecting Hanoi with Ho Chi Minh City. However, for a number of years Vietnam Railways has been proposing construction of a standard gauge high-speed rail line known as the North-South Express Railway. Although in 2010 the project was rejected as being too costly by the National Assembly of Vietnam (NAV), in more recent years that Ministry of Transport has again been carrying out feasibility studies with suggestions being made that the whole project could be completed by 2050.

In November 2021 Vietnam’s prime minister, Mr Pham Minh Chinh, approved the 2021-2030 rail network strategy which, as well as planning upgrades to seven of the country’s existing railway lines (some metre gauge, some standard gauge and some with dual gauge sections), also proposed the construction of nine new lines across the country, seven of which are to be built to 1435mm gauge and the other two to have dual metre and 1435mm gauge track.

The strategy also included prioritising the North-South Express Railway, although there was debate about the line’s maximum speed, with both 200km/h and 350km/h being put forward.