GERMANY's Vossloh Group has reported an 11% increase in revenue and a 62.3% jump in Ebit for the first half of 2015 despite a drop in sales of rail fastenings. 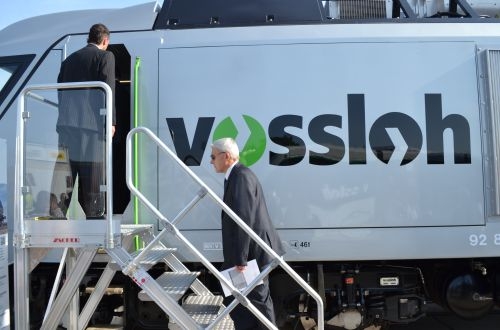 Vossloh's Customised Modules division, which includes track switches, and control and monitoring systems, saw a 14.5% increase in first-half sales from €220.9m in 2014 to €253.1m this year, while adjusted Ebit improved by 59.2% to €15.5m. Vossloh says it had particularly high demand in the United States, Brazil and Sweden.

First-half revenue in the Lifecycle Solution division, which focuses on rail and switch maintenance, fell from €30.7m in 2014 to €28.7m, although Ebit remained stable at €0.5m. However, Vossloh forecast significant growth in the second half of 2015. It has won a three-year "reference" project from German Rail (DB) to take over responsibility for switch and rail maintenance on sections of the Leipzig – Dresden main line.

"The transformation of Vossloh planned up to 2017 is taking place dynamically and consistently," says Vossloh's CEO Mr Hans Schabert. "Initial successes are already tangible after the first six months of 2015. We are also confident about the remaining months of the current financial year."