AFTER a subdued start to 2012, Vossloh has reported a healthy increase in second quarter sales, which rose 4.5% compared with the same period last year. Overall, first half sales rose 1.8% to €571.3m, while the group's order backlog stands at €1.5bn. 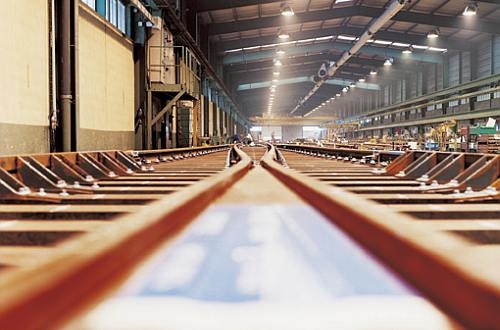 Vossloh says its rail infrastructure business has been affected by the suspension of construction work on high-speed lines in China, which is now starting to resume. Following a break of around a year, shipments of rail fasteners to China resumed last month.

The problems in China meant that sales by the Fastening Systems business unit in the first six months of this year fell from €138.5m to €114.3m. This contributed a 5.4% slip in overall rail infrastructure sales, which fell to €353.1m. Nonetheless, the Switch Systems unit reported a 11.4% year-on-year rise in first-half sales, climbing to €216.7m.

The period was a positive one for the rolling stock business, and the Transportation Systems unit reported growth of 15.9% in the first half, with sales reaching €218m. Vossloh's Kiel plant, which manufactures centre-cab diesel locomotives, saw year-on-year revenues increase from €43.7m to €58m. Meanwhile sales rose from €75.3m to €87.4m at the Albuixech plant in Spain, which produces larger diesel locomotives and light rail vehicles.

Vossloh's sales forecast for the full year remains in the €1.25-1.3bn range, although it stresses that this target is dependent on revenue from China continuing to flow in the second half and recovery in demand for rail welding in Germany.