VOSSLOH has announced that group sales from continuing operations increased from €822.5m to €918.3m in fiscal 2017. However, the company is set to end the year with a negative net income due to losses incurred from Locomotives, the remaining unit of its Transportation division, which the company says with a sale now close, it can class as discontinued operations from December 31. 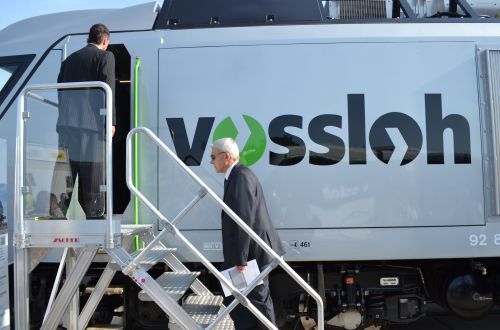 Vossloh says it expects a positive net cash inflow from the sale of the business unit, which is based at a new factory at Kiel-Suchsdorf, Germany.

Vossloh says it recorded an Ebit of €70m in 2017, and an Ebit margin of 7.7%, which compares with 7.0% and Ebit of €57.5m in 2016. Vossloh expects to maintain its 2017 sales levels in 2018, although Ebit and Ebit margin are expected to fall below last year’s figures due to lower anticipated earnings from sales of fastening systems in China.

The company says that while the Chinese market, particularly for high-speed systems, remains buoyant, “project-related fluctuations are leading to temporarily weaker business performance,” and that it does not expect to compensate for this despite improving performance elsewhere in the group.