Hydrogen-powered train to be tested next year. 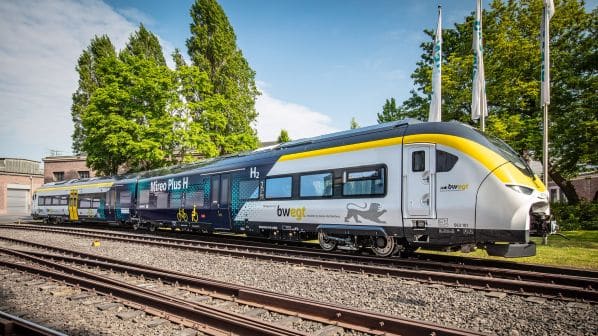 BEG says that the memorandum of understanding (MoU) signed in 2021 by the Bavarian state government, BRB and Mireo Plus H manufacturer Siemens Mobility has now become “a concrete contract,” with trials expected to start by mid-2023.

A prototype Mireo Plus H train will operate in regular service for 30 months on the Augsburg - Weilheim - Peißenberg, Augsburg - Kaufering and Augsburg - Kaufbeuren - Füssen routes.

Following the trials, BEG expects the hydrogen-powered train to be in regular passenger service by January 2024 at the latest.

BEG says that the trials will enable it to thoroughly assess the suitability of the Mireo Plus H for regular operation in Bavaria, with the routes from Augsburg selected for this purpose due to their curves and gradients that place special demands on train performance.

With diesel trains still in use in large numbers on non-electrified routes, hydrogen would be the first choice for decarbonising regional services, BEG notes, particularly on longer routes where it would be difficult to provide sufficient recharging facilities for battery-powered trains.

The Siemens Mireo Plus H was inspected last month at the InnoTrans trade fair in Berlin by Mr Christian Bernreiter, Bavaria's transport minister and chairman of the BEG supervisory board.

"I am delighted that test operation is now signed and sealed,” Bernreiter says. “This will be a mobility showcase for Bavaria and is an important step on the way to climate-neutral drive technologies in Bavarian regional transport."