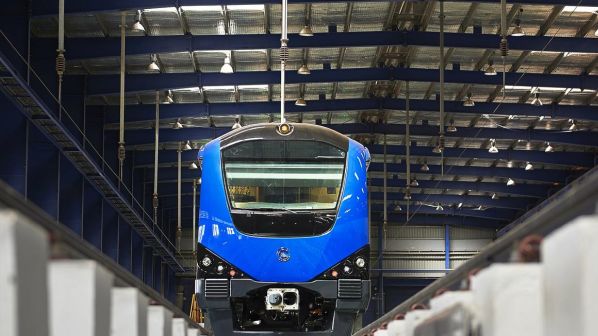 The new trains will be built at Alstom's plant at Sri City in Andhra Pradesh.
Photo Credit: Alstom

CHENNAI Metro Rail (CMRL) has awarded Alstom an Rs 7.98bn ($US 98.7m) contract for the manufacture and commissioning of 26 three-car metro trains for use on the under-construction 26.1km Line 4-Orange of the Phase 2 metro project.

The 80km/h driverless trains will be equipped to support unattended train operation (UTO). An Alstom spokesman confirmed that the trains will be powered by 25kV ac overhead electrification and that the scope of the contract includes training of CMRC personnel.

The trains will be manufactured at Alstom’s plant at Sri City in Andhra Pradesh, in line with the Indian government's Make in India initiative. The facility has manufacturing capacity for 480 metro cars annually.

Line 4 will have 18 elevated and 12 underground stations, running east-west from Light House to Poonamallee Bypass. Work on the elevated section between Porur and Power House has been underway for “many months” with construction of the Poonamallee - Porur section due to start imminently, according to CMRL. The first of two tunnel boring machines has commenced work on the underground section, the authority says.

Alstom has already delivered 208 metro cars for the 54km Chennai Metro Phase-1, which consists of the 23.1km Blue Line and the 22km Green Line, and opened in stages between June 2015 and March 2022. The network is the fourth largest metro in India.

Chennai Metro Phase-2 will consist of three lines totalling 118.9km and was approved in 2019 with the objective of completing construction between 2026 and 2028. A combined 52km section of Line 3 from Madhavaram to Sholinganallur and Line 5 from Madavaram to CMBT are being built as a priority. The project is partially funded by the Japan International Cooperation Agency (Jica) through an ODA loan.

Elsewhere in India, Alstom has delivered metro trains for Delhi, Lucknow and Kochi. It is also manufacturing trains for Mumbai Metro Line 3, Agra-Kanpur metro and the Indore-Bhopal projects.