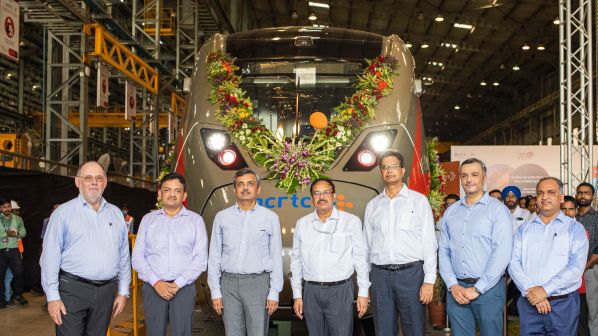 ALSTOM has rolled out the first of 30 six-car electric trains that it is supplying for the standard gauge Delhi - Ghaziabad - Meerut rail corridor that the National Capital Regional Transport Corporation (NCRTC) is developing as part of its Rapid Rail Transport System (RRTS) project.

With a maximum speed of 180km/h, the new fleet is expected to cut journey times over the 82.5km between Delhi and Meerut by 40%.

Under a contract worth €436m inherited through its takeover of Bombardier, Alstom has completed the first train in less than 12 months since the start of production at its plant at Savli in Gujarat state.

Alstom says that first RRTS train is “100% made in India.” Traction and other electrical equipment is manufactured at the company’s factory in Maneja, Gujarat, while Savli is manufacturing bogies and car bodies and is responsible for train testing.

“It is a proud moment for all of us to witness the roll out of the RRTS trainset,” says India’s minister for housing and urban affairs, Mr Hardeep Singh Puri. “Designed in India, made in India, made for India – it is the perfect demonstration of the prime minister’s Make in India initiative.”

The January 2022 edition of IRJ includes an in-depth interview with Vinay Kumar Singh, NCRTC managing director, who speaks on the innovative approach to project management for the RRTS programme. Website subscribers can read the article here.