ALSTOM has shipped the first of 10 Metropolis trains ordered for Hanoi metro Line 3, which is currently under construction. 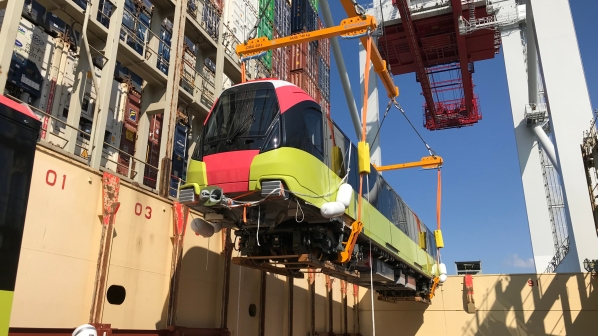 The four-car trains were shipped from the port of Dunkirk, France, on September 9, and are due to arrive in Vietnam’s northern port city of Hai Phong by the end of October.

Alstom, as the leader of a consortium with Colas Rail and Thales, signed a contract in January 2017 with Hanoi Metropolitan Railway Management Board (MRB) to supply electrical and mechanical systems for the line. As well as the fleet, Alstom is also supplying its Urbalis 400 CBTC solution. The operational control centre and telecommunications are being delivered by Thales.

Phase 1 of Line 3 will be 12.5km long, including 8.5km at grade and 4km underground, with 12 stations including eight at grade and four underground. The surface stations are due to open in 2021, with the underground stations opening in 2022. Phase 2 will see the line extended to 48km.

Line 3 is the second metro line under construction in the city, and is expected to carry 8600 people per hour per direction.

The line forms part of a network of nine metro lines and three monorail lines which are expected to open by 2050. Construction of the 13km Cat Linh - Ha Dong Line 2, Vietnam’s first metro line, was completed in December with final safety checks currently underway.