The €2.5bn order is Alstom’s largest ever in Germany. 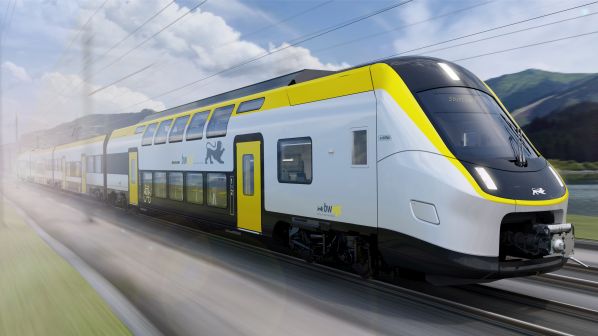 BADEN-WÜRTTEMBERG state-owned rolling stock leasing company SFBW has signed a €2.5bn contract with Alstom for the supply of 130 Coradia Stream High Capacity (HC) electric double-deck trains to operate in Baden-Württemberg. Alstom will also provide maintenance for 30 years, with the contract the manufacturer’s largest-ever in Germany. The contract includes an option for up to 100 additional trains.

The trains are equipped with ETCS level 2 and 3, as well as Automatic Train Operation (ATO) at Grade of Automation (GoA) 2, in line with the Digital Node Stuttgart (DKS) project to develop Germany’s first digitised railway node. The trains will enter operation in 2025 at the same time as the first two sections of the DKS.

The subsequent upgrading of the vehicles to TSI CCS 2022, the future evolution of the European standard for cross-border traffic in the European Economic Area, will allow all three sections of the DKS to be used. This will be the first time in Germany that newly built vehicles will be equipped with a Train Integrity Monitoring System (TIMS) and ETCS Level 3 and, in partial stages, the Future Railway Mobile Communication System (FRMCS).

The trains can operate in multiple, and feature air-conditioning, Wi-Fi, numerous charging options for mobile phones and laptops, and reading lamps. The trains also feature lounge areas, conference and family compartments and multi-purpose spaces for large luggage, prams, and bicycles. The opening and closing of the single-leaf doors has been optimised to improve boarding and alighting. To improve journeys for passengers with limited mobility, the doors allow step-free access from standard 760mm-high platforms, while the trains are also equipped with wheelchair lifts for stations with different platform heights.

SFBW announced plans for the order in December 2019.

“When awarding the contract, we set very high standards for the performance and technology of the vehicles,” says Baden-Württemberg minister of transport, Mr Winfried Hermann. “In terms of passenger comfort, we are setting new standards in regional rail transport that have not yet been achieved in Germany.

“These trains are sprinters in local transport. We want to attract many additional passengers with these trains. Alstom has to ensure seamless operational capability of the trains on a daily basis within the framework of the so-called life cycle model (LCC model). Care was also taken to ensure that, despite very powerful vehicles with a top speed of 200km/h, we also get very energy-efficient vehicles. Alstom will also be responsible for energy consumption for the duration of the contract.”

“Regarding the vehicle design, we have paid particular attention to passenger comfort,” says SFBW managing director, Mr Volker M Heepen. “There will be reclining seats, well-designed seating landscapes, areas for people with reduced mobility, as well as an innovative lighting concept and strong Wi-Fi.”