The introduction of the Acela trains was postponed by Amtrak from last autumn. 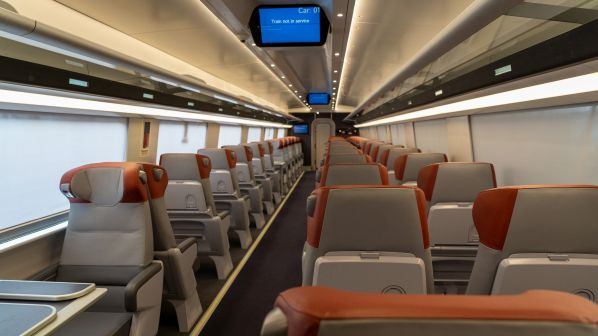 AMTRAK and Alstom have unveiled the interiors of the fleet of new Acela high-speed trains that are due to be introduced on the Northeast Corridor (NEC). Amtrak says the new Acela trains offer enhancements in comfort, technology, innovation, and safety compared with the existing Acela trains.

First class, which features red accents to distinguish it from business class, has more space, leg room and personal tray tables which can be raised or lowered.

A café car will offer food and beverages, including a self-select and check-out option, a standing area with hip rests, electrical outlets for charging, digital information screens, and separate bins for rubbish and recycling.

The Alstom Avelia Liberty trains are formed of two compact power cars and nine articulated intermediate trailer coaches. The trains have a design speed of 300km/h but will be limited to a maximum of 257km/h on the NEC.

Amtrak confirmed in June 2021 that the introduction of the fleet had been delayed from autumn 2021 to early spring 2022, due to technical glitches and Covid-19 related supply chain problems.

“These high-speed trains are proudly built by our team in Hornell, in partnership with the International Association of Machinists, and rely on a strong domestic US rail supply base with nearly 250 suppliers in 27 states,” says Mr Michael Keroullé, president, Alstom Americas.