A study examined ways to replace diesel traction on the state network. 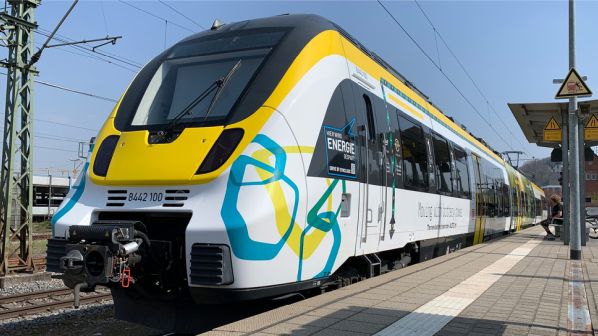 THE German state of Baden-Württemberg has published a study into possible alternatives to diesel traction on its rail network, and says it will no longer consider hydrogen traction.

The study, conducted by a consortium including Transport Technology Consult Karlsruhe (TTK) and Komobile, examined 16 non-electrified routes, and compared electrification with the introduction of battery or hydrogen traction.

The Baden-Württemberg Ministry of Transport says the required infrastructure was considered, with the costs also examined and possible route-specific synergies investigated.

The production and maintenance costs of the different types of rolling stock were also examined, along with their energy requirements and CO2 emissions. The ministry says the economic cost was the main aspect evaluated, but additional benefits such as the ability to close gaps in electrification or to reroute traffic were also taken into account.

The ministry says that following the analysis, “operation with hydrogen hybrid trains will not be considered further in the near future due to various operational and economic reasons.” It says that in a direct comparison, hydrogen technology could not match battery traction or electrification on any of the routes considered by the study.

The study recommends the introduction of BEMUs on the following routes:

Electrification is recommended for:

“In order for the state to achieve its climate goals in the transport sector, diesel propulsion must also become a thing of the past on the railways as soon as possible,” says Baden-Württemberg minister of transport, Mr Winfried Hermann. “Since the construction of overhead lines takes a long time and is sometimes very expensive, trains with alternative drives are the means of choice on some lines. The study has provided valuable insights in this regard.”

A feature on the developments made in battery traction appeared in the October issue of IRJ.