A proposal by the British government to eliminate diesel-only passenger trains from the main line network by 2040 is feasible, according to the initial findings of a technical review by the Rail Industry Decarbonisation Taskforce and the Rail Safety and Standards Board (RSSB). 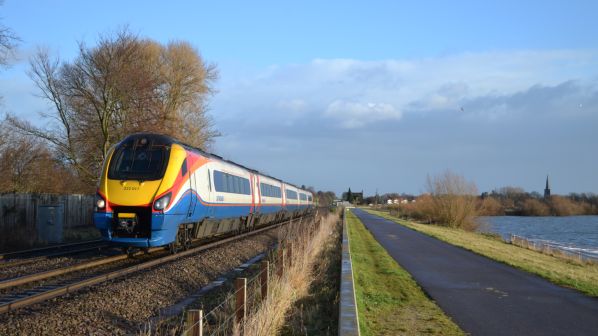 The British government cancelled electrification of the Midland Main between Kettering, Nottingham, Derby and Sheffield in 2017. The procurement of new bi-mode trains is now planned as part of the new East Midlands franchise, which will be awarded this year.
Photo Credit: Keith Barrow

The taskforce’s Initial Report to the Minister for Rail, which was published on January 31, responds to a challenge laid down by the then rail minister Mr Jo Johnson in February 2018 for the industry to phase out the operation of diesel-only trains within 22 years.

However, the report warns that there is no “silver bullet” solution to replace diesel traction and stresses the need to benchmark alternatives against electrification, lifecycle costs and carbon impacts to ensure perverse outcomes are not preferred. These benchmarks will also need to be updated periodically as alternative traction technologies develop.

Traction is described as the “greatest challenge” facing decarbonisation of the railway, with traction energy accounting for 63% of greenhouse gas emissions from Britain’s railways. During 2016-2017, electric passenger trains consumed 3524m kWh of electricity and 501 million litres of diesel, generating 2.96 million tonnes of CO2. Figures from the Office of Rail and Road show passenger rail emissions fell significantly in the decade to 2016 due to the introduction of new rolling stock and improvements in railway operations.

At present only 42% of the 15,811km network is electrified and according to Network Rail data this will only increase to 48% by 2039. However, pure electric vehicles now comprise more than 72% of the national fleet and more than 80% of committed new vehicles. All 1030 bi-mode vehicles in operation or on order are equipped with diesel engines as their on-board power source.

The report says that decarbonising traction energy “could be achieved progressively through franchises or sending clear signals to the market through policy and other mechanisms.” The pace of change will depend on how well the government and the industry are able to work together to develop clearer and more consistent policies, as well as the availability of incentives where the business case for investment does not exist.

An RSSB-commissioned research project, Options for Traction Energy Decarbonisation in Rail (T1145) found that in the short-term, a “reasonable reduction in carbon emissions” can be achieved by taking advantage of recent advances in diesel engine technology and encouraging the use of bi-mode trains. An estimated 85% of diesel engines in use on passenger trains on the British network predate any emissions regulations and the taskforce report indicates that employing “state-of the art fuel efficiency measures” alongside hybridisation could generate a 40% reduction in CO2 per kWh. 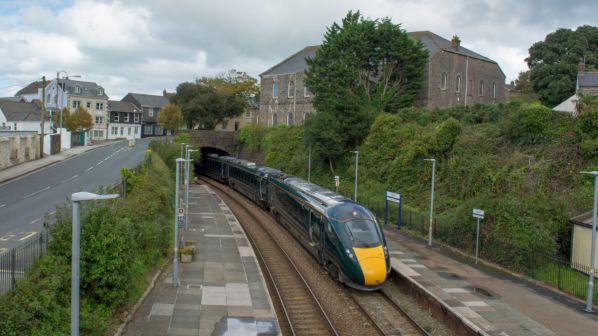 In the medium-term, T1145 says hydrogen fuel cells offer a more practical solution for reducing carbon emissions, although applicable standards and the restrictive British loading gauge are highlighted as obstacles to the commercial deployment of hydrogen trains. Nonetheless, Alstom and Eversholt Rail recently unveiled plans for a hydrogen electric multiple unit, which is expected to begin operating by 2022.

The T1145 study found that the volume required for hydrogen storage effectively limits fuel cell trains to a maximum of 120km/h and for operation at 160km/h or more “electrification is the obvious and only practical option to decarbonise Britain’s railways.” The taskforce says its research demonstrates that no suitable alternatives to diesel or electric traction will exist for such operations before 2040.

The report acknowledges that bi-mode trains alter the business case for electrification, and an upcoming report will highlight how electrification programmes can be delivered at significantly lower cost than the Great Western Electrification Programme, which suffered a huge escalation in delivery costs.

With further decarbonisation of power generation in the coming years, the report says it “makes sense” to electrify heavily-used lines where there is no credible alternative means of achieving zero or near-zero carbon emissions. This includes all routes with line speeds exceeding 120km/h and mixed-traffic lines with significant freight flows.

“Advanced hybrid” trains could reduce carbon emissions by 40% on non-electrified lines, according to the report, with hydrogen fuel cells considered “the best option” for achieving reductions beyond this. However, the report stresses that hydrogen production would need to be based on the use of low-carbon electricity.

Vivarail announced details of a hydrogen fuel cell variant of its D-Train multiple unit on January 31.

The report also warns of potential challenges arising from the need for supporting infrastructure for alternative traction technologies, suggesting that the operational impact may exceed that of diesel.

“On its own, the rail industry is unlikely to be able to achieve a cost-effective rollout of a completely new infrastructure for providing, say, hydrogen or some form of synthesised gas fuel, as it will not be able to amortise the development costs on a large enough scale,” the report states. “Any rollout of such integrated fuel production, distribution and fuelling systems will probably depend on what happens in the automotive sector.”

There is also the possibility that deployment of new technologies will not be standardised and coordinated across the network, raising the possibility that hydrogen infrastructure and lineside energy storage may be required on the same route. The report says that the combined costs and implications of such duplication will need to be considered.

RSSB says the taskforce will issue its final report in the spring.