PORTERBROOK and the University of Birmingham’s Centre for Railway Research and Education (BCRRE) announced on June 20 that Britain’s first hydrogen train, HydroFlex, has received approval for mainline testing following a successful proof-of-concept. 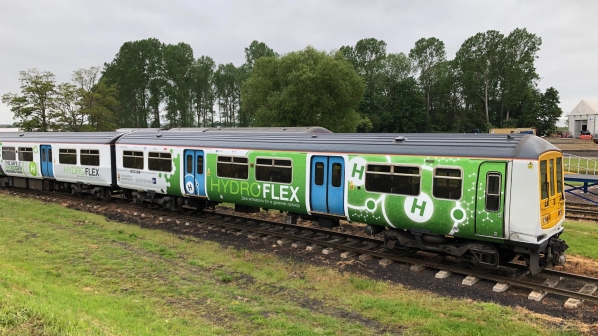 The HydroFlex prototype hydrogen train will be unveiled at next week’s Rail Live event.

The HydroFlex pilot involves the fitment of a hydrogen powerpack to an existing class 319 train, which will eventually allow it to run on conventional electrified and non-electrified routes.

The prototype train was unveiled at this week’s Rail Live event.

The HydroFlex project was recently awarded funding from Innovate UK through its First of a Kind competition to advance the prototype towards mainline testing.

“We have been very pleased with how the train has performed on the test track and are looking forward to getting it out on the national rail network,” says Ms Helen Simpson, head of innovation and technical services at Porterbrook. “Demonstrating how mainline approvals for hydrogen can be delivered is the next step forward and allows more people to see the benefits of hydrogen.”

“Our prototype shows how hydrogen powered technology can be incorporated within existing trains, without needing to modify the drivers’ controls,” says Dr Stuart Hillmansen, senior lecturer, BCRRE. “It’s an exciting advance because it shows how this technology could be adopted into the mainline system to deliver emission-free public transport.”