FOLLOWING protracted negotiations, CAF has agreed to conduct remedial work at its own cost on 19 23.6m-long three-section Urbos LRVs operated in the French city of Besançon, after cracks were discovered in the bodies of the low-floor vehicles in December 2017. 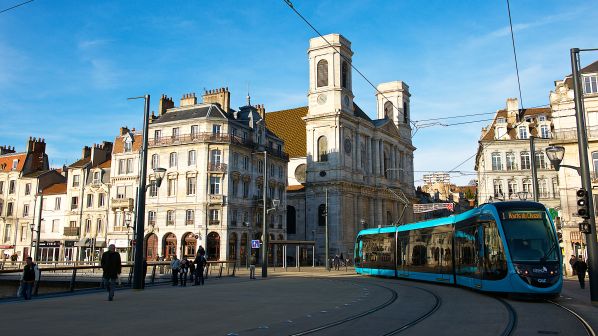 The Besaçon network was inaugurated in September 2014.
Photo Credit: Shutterstock.com

Similar problems were subsequently identified in CAF Urbos LRVs used in Belgrade. Work will commence in the spring, with each vehicle spending a month out of service. CAF’s staff from its Bagnères-de-Bigorre plant in southwest France, which built the LRVs, will carry out the work in Besançon.

A further issue has now been revealed by the local media.

Since the network opened in September 2014, traffic has grown to the extent that Besançon now wishes to extend its LRVs by 12 metres to 36 metres - the city built all its tram stops with long platforms with such an update in mind.

However, CAF says it cannot extend the trams and the city has failed to find any other company to carry out the work. Luckily the current Covid-19 crisis has reduced traffic levels, giving the city time to seek other solutions.