SIEMENS has received an order to supply a further 15 “Mask” S200 LRVs to modernise Calgary’s light rail vehicle fleet, replacing the Siemens U2 vehicles that have been operating for almost 40 years. 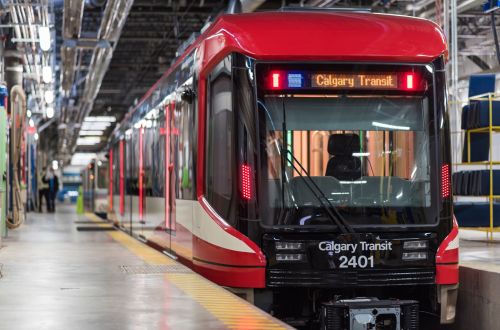 The vehicles are custom designed vehicles for Calgary’s high station platforms, and will continue to feature the unique Calgary mask look, which was inspired by an ice hockey goalkeeper mask.

Siemens has delivered more than 260 vehicles for Calgary’s light rail system over the past four decades. The new vehicles will be built at Siemens’ facility in Sacramento.

The Calgary S200 LRVs have a maximum operating speed of 80km/h, with space for 247 passengers at six per m2 including 60 seated. The high-floor vehicles also have two wheelchairs spaces and two multi-purpose spaces. The 600V dc fleet feature four 145kW traction motors.

Calgary Transit awarded Siemens a $C 201.6m ($US 150.4m) contract in September 2013 to supply 63 S200s, to allow the introduction of four-car operation and enable the withdrawal of the oldest U2 vehicles, which date from the opening of the system in 1981. This was followed with an order for six additional S200 LRVs in 2017.

“These U2 cars have been reliable workhorses that have more than exceeded their expected life and we’re proud at how we’ve been able to update and replace them with our S200s,” says Mr Michael Cahill, president of rolling stock for Siemens Mobility North America.