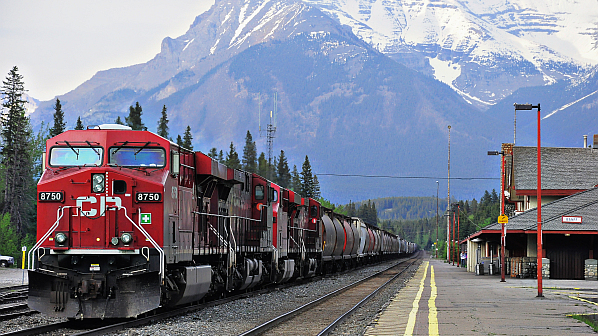 CANADIAN Pacific (CP) has received a $C 15m ($US 12m) grant via the Alberta government’s Emissions Reduction Alberta (ERA) to expand its Hydrogen Locomotive Program from one to three locomotives and also to add hydrogen production and fuelling facilities.

CP is receiving the 50/50 matching grant from the ERA’s Shovel Ready Challenge programme. This builds on the $C 15m that CP had already planned to invest in the project this year.

The Class 1 announced in December 2020 that it would design and build the first line-hauled hydrogen-powered locomotive for North America. CP says the plan involves using  fuel cells and batteries to power the electric traction motors.

With the additional funds, the Class 1 plans to build upon its early research work and convert an additional line-haul locomotive and a shunting unit.

CP hopes that the additional work will refine the process of converting diesel-electric traction to hydrogen-electric units over a series of three locomotives, which collectively represent most types in use throughout North America.

The project requires the installation of hydrogen production and fuelling facilities at CP rail yards in Calgary and Edmonton. CP says the former will include an electrolysis plant to produce hydrogen from water and that this facility will harness renewable power sourced from solar panels at CP’s headquarters and produce zero greenhouse gas emissions.

The Edmonton facility will include a small-scale steam methane reformation system that will generate hydrogen from Alberta’s natural gas resources. CP says this system will be built to accommodate the possible future addition of greenhouse gas capture equipment.

For an in-depth look at hydrogen projects across the globe and whether it’s the right alternative fuel, read the October edition of IRJ or click here.