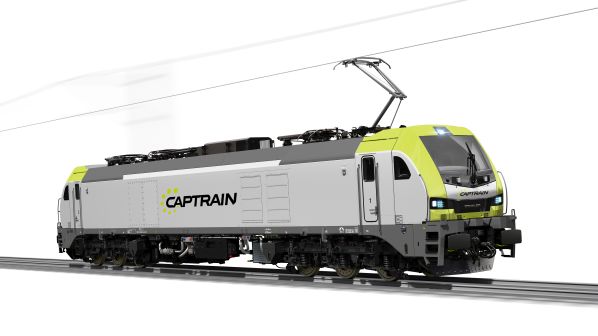 The order comprises five 1435mm standard gauge units, which will be deployed on services between Spain, France and Luxembourg, pending certification in these countries. The locomotives will initially be based in the northern Spanish cities of Barcelona and Tarragona and will later also operate from Valencia and Bilbao.

The other six 1668mm Iberian gauge locomotives will operate heavy freight trains on Spanish 25kV electrified lines, including on the under-construction León - Asturias line via the Pajares tunnel.

The locomotives will be delivered in the second half of 2021 and the contract includes an option for a further 10 locomotives of the same type.

Alpha Trains and Captrain are the launch customer for the Euro 6000, which Stadler will manufacture at its site in Valencia. The locomotives are designed to allow the haulage of freight trains of up to 1800 tonnes.

The vehicles are designed to operate on the specific requirements of the Mediterranean freight corridor, which requires the ability to operate on three different voltages - 3kV ac, 25kV ac and 1.5kV dc - and multiple signalling systems.

Captrain hopes that the new locomotives will facilitate an increase in Spanish rail freight volumes, and help to fulfil the European Commission target for rail to secure a 30% share of overall freight traffic by 2030.