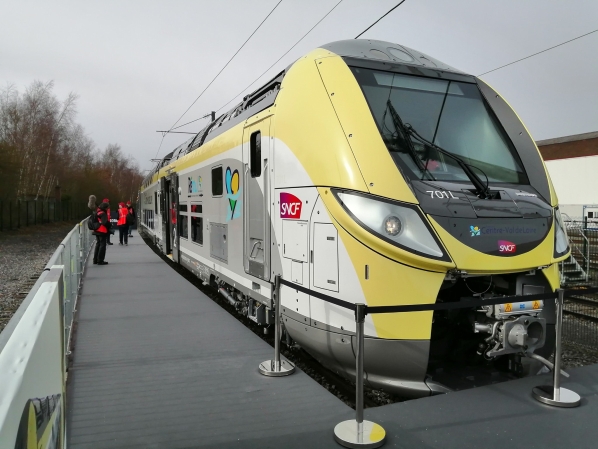 The new 200km/h trains will replace the 50-year-old fleet currently operating in the region. The trains were ordered under a €375m option in a 2010 contract between French National Railways (SNCF) and Bombardier.

The Center-Loire Valley Region plans to deploy the new trains on the Paris - Orléans - Tours, Paris - Bourges and Paris - Montargis - Nevers Balance of Territory (TET) inter-city services, with delivery due to be complete in 2022.

The 110m-long articulated trains are unusual in that they have three standard length double-deck coaches, three short coaches containing two sets of double doors per side as well as the end driving cars. The driving cars also differ in that one is a double-deck vehicle with first-class seating, while the driving car at the other end of the train has limited second-class seating on one deck, with technical equipment located above.

The trains will have capacity for up to 373 passengers, space for two wheelchairs and nine bikes, large luggage storage areas, a dynamic passenger information system and Wi-Fi.

The trains will be maintained at a new €70m maintenance centre in Orléans which will have four 110m-long tracks inside the depot and six sidings outside.

The unveiling comes a week after the Centre-Val de Loire Region signed a memorandum of understanding (MoU) with the French government to ensure funding is available to retain services on branch lines in the region, after their closure was proposed in 2018.

These include the Bourges - Montluçon, Dourdan - La Membrolle, Chartres - Courtalain, Tours - Loches, Tours - Chinon and Salbris - Valençay lines, which are used by 1.5 million passengers a year.

The MoU will see €250m invested in the lines, with the work financed 50% by the region and 50% by the state and SNCF.