COLOGNE Transport Authority (KVB) has issued a call for tender for the design, manufacture and supply of 126 low-floor LRVs, with an option of another 47 vehicles, for a total investment of around €450m. 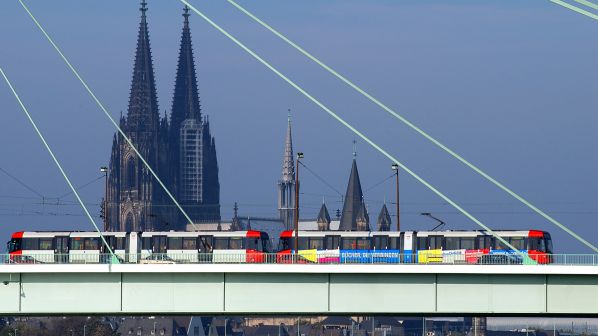 KVB is out to tender for a fleet of low-floor LRVs.
Photo Credit: Christoph Seelbach, KVB

The 750V dc vehicles must comply with BOStrab and EBO standards and will operate in Cologne, as well as on routes equipped for light rail operation belonging to the Cologne Harbour and Freight network (HGK).

The articulated fleet will comprise 62 type NF12 60m-long vehicles and two NF6 30m-long units. The LRVs will replace Bombardier series K4000 trams which have reached the end of their life. The option will consist of 11 long and 25 short LRVs. Once lines 1 and 9 have been upgraded, KVB plans to operate 90m-long LRVs to increase capacity and cope with rising demand.

The LRVs will be fitted with a driver assistance system to reduce energy consumption and avoid collisions. The welded car body shells will be manufactured from low-corrosion steel. Each LRV will be 2650mm wide and between 27.5m and 30m long, with a ground clearance of 80mm and an entrance floor height of 400mm. They will need to be able to negotiate curves with a minimum radius of 25m and operate on lines with a maximum gradient of 6%. The 80km/h LRVs will have a maximum axleload of 10 tonnes.