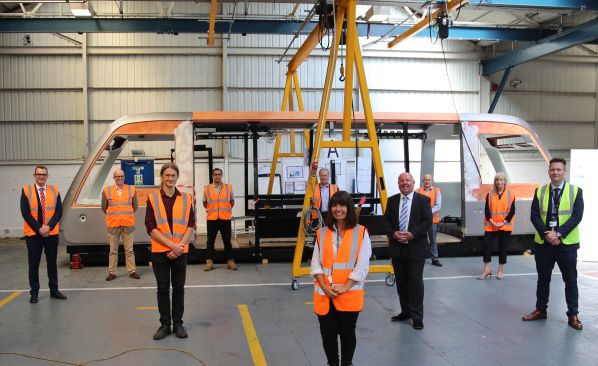 The prototype will be able to carry 56 passengers and will be tested on the Very Light Rail National Innovation Centre Test Track at Castle Hill in Dudley. The prototype vehicle is scheduled to start on-track testing early next year.

Following a comprehensive test programme involving both the prototype vehicle and track, a new line is planned to run across Coventry linking the mainline station with Walsgrave Hospital, operated by a fleet of locally manufactured lightweight LRVs.

The project is led by Coventry City Council in collaboration with engineers at WMG at the University of Warwick and Transport Design International. The project is being funded by the government’s Local Growth Fund through the Coventry and Warwickshire Local Enterprise Partnership (CWLEP) and the West Midlands Combined Authority Devolution Deal.

“The Coventry Very Light Rail project will deliver a step change cost reduction for light rail in Britain,” says Dr Darren Hughes, associate professor at WMG. “This marks the beginning of the journey to roll out low-cost, rail-based transport for medium sized cities in Britain.”