Next step for “globally significant project.” 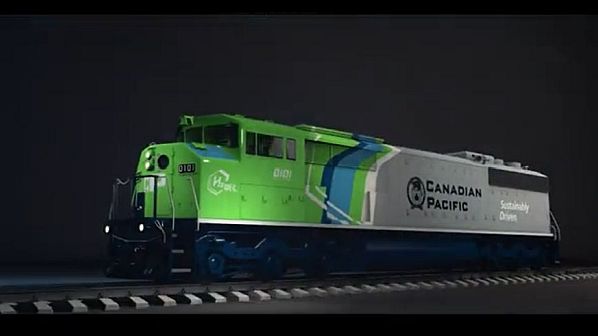 CANADIAN Pacific (CP) has confirmed the livery and branding that its H2 0EL hydrogen locomotive will carry as preparations for its official painting and launch begin.

CP says the locomotive’s livery articulates the impact of the project with the blue and green paint representing sustainability, water and technology.

“This is a globally significant project that positions CP at the leading edge of decarbonising the freight transportation sector,” says Mr Keith Creel, CP’s president and chief executive.

Six 200kW fuel cell modules supplied by Ballard Power Systems are being fitted to the locomotive.

The Class 1 operator aims to develop North America’s first line-haul hydrogen-powered locomotive. This involves retrofitting a locomotive by removing its diesel engine and traction alternator and replacing them with hydrogen fuel cells and battery technology to drive its electric traction motors. The aim is to significantly reduce greenhouse gas emissions and support rail freight’s transition to a low-carbon future.

Once the locomotive is operational CP plans to conduct rail service trials and qualification testing to evaluate the technology’s readiness for rail freight.

The project follows CP’s prior experience with testing low-emission locomotive technologies including biofuel, compressed natural gas and batteries. The operator claims to have improved locomotive fuel efficiency by more than 40% since 1990. It also highlights that nearly all freight locomotives used by operators across North America are diesel. “The ability to retrofit diesel locomotives with a zero-emission technology provides a practical pathway to decarbonising the freight-rail industry,” says CP.

In late-July, CP published its first comprehensive Climate Strategy where it admitted that locomotive operation represented its largest emission source, but said it had committed to reducing Scope 1-3 greenhouse gas (GHG) emissions from its locomotives by more than 38% by 2030.

A feature examining the role of hydrogen as an alternative power source for rail is in the October edition of International Railway Journal.