All 21 Urbos 3 LRVs removed from service for at least four weeks. 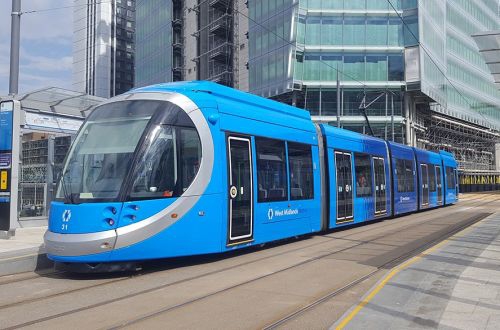 ALL 21 CAF Urbos 3 five-section LRVs have been withdrawn from service by Midland Metro in Birmingham for the second time in less than six months following the discovery of cracks.

The latest service suspension began on November 13, and is expected to last for at least four weeks. In June services were suspended for four days after the initial discovery resulted in the removal from service of the LRV fleet, which date from 2012-2015, for inspections and repairs.

Now inspections have discovered more extensive and permanent repairs are required, and Midland Metro is working with CAF to identify the issue and conduct repairs. In a statement the operator said it was unable to confirm when the services will resume. The removal from traffic of the LRVs means that two route extensions which were due to open this year, the 800m-long extension to Wolverhampton city centre and the £68m 1.3km Centenary Square - Edgbaston line have been postponed until 2022.

One Midland Metro LRV has returned to Wednesbury depot in the West Midlands after being sent to Zaragoza, where CAF built the fleet, for repairs. Similar issues have been identified with CAF LRVs used in Belgrade, Serbia, Besançon, France, and Sydney.

The West Midlands Combined Authority (WMCA) has asked Transport for West Midlands (TfWM), which owns the Midland Metro, to conduct an independent review into the region’s metro services. WMCA says this will be undertaken by an industry expert.

West Midlands mayor, Mr Andy Street, called the situation with the LRVs “incredibly disappointing and frustrating,” and says the review will establish what exactly has gone wrong and what changes are required.

Currently the operator requires 18 LRVs to operate a peak service, but has previously operated with a fleet of nine. There are a further 21 Urbos 100 LRVs on order, with eight so far delivered to Birmingham. The remaining 13 are due by the end of 2023.