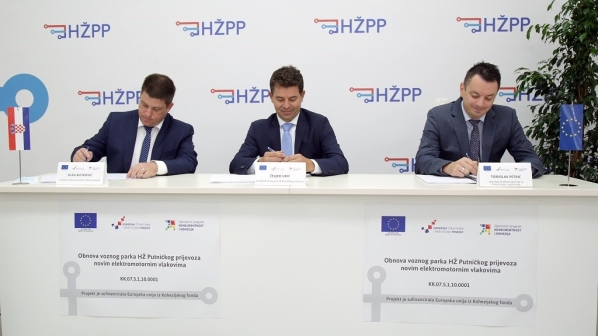 The agreement was signed at HŽPP’s headquarters on September 21.
Photo Credit: HŽPP

A contract for the fleet, which includes 10 regional EMUs and 11 suburban EMUs, is due to be signed with an un-named supplier within a month.

The EU Cohesion Fund will provide 85% of the Kuna 1bn ($US 159.6m) order cost, with the government covering the remaining 15%. An agreement to confirm the finding was signed by the minister of the sea, transport and infrastructure, Mr Oleg Butković, the director of the Central Agency for Financing and Contracting, Mr Tomislav Petric, and the president of HŽPP, Mr Željko Ukić, at HŽPP’s headquarters on September 21. The signing was also attended by the minister of regional development and European Union funds, Ms Nataša Tramišak.

The project continues HŽPP’s fleet modernisation programme, which aims to replace trains that are mostly around 40-years-old. The 160km/h, low-floor trains will have spaces for wheelchairs and bicycles, as well as wheelchair ramps at the doors. They will also be equipped with CCTV and Wi-Fi.

The first train will be delivered within two years of the singing of the agreement with the manufacturer, with the final train due to be delivered by December 2023.

As well as improving the quality of service for passengers, the new trains will also reduce operating costs and support an increase in service frequency.

During the signing, Ukić also announced the procurement of seven DMUs to improve services on non-electrified lines.