The deliveries included the completion of a 27-train order for Shijazhuang Metro. 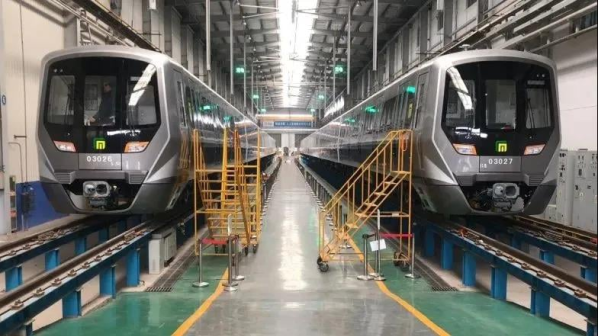 CRRC completed an order for 27 Type A trains for Shijazhuang Metro this month.
Photo Credit: CRRC

CRRC announced that it has delivered the last of a fleet of 27 Type A metro trains which will be used to operate services on Shijiazhuang Metro’s Line 3.

The locally-built six-car air-conditioned trains each consist of four motor cars and two trailer cars and have a maximum operating speed of 80km/h and capacity for 2520 passengers.

The new deliveries bring the total number of trains produced by CRRC for the Shijiazhuang Metro to 45 trains for lines 2 and 3 since March 2016.

The deliveries were completed ahead of the opening of the 15.7km Shijiazhuangzhan - Lexiang section of Line 3 on April 6. The new 12-station extension constitutes the final eastern section of the line’s Phase 1 as well as Phase 2 and will extend the line’s total length to 27.5km, with 22 stations.

CRRC Changchun also unveiled the first of 20 low-floor, catenary-free LRVs currently under construction for Jiaxing on March 17. The five-section ‘Nanhu’ LRVs are 34.8m long and have a maximum speed of 70km/h. The vehicles are equipped with a supercapacitor-based energy storage system.

The vehicles will operate the city’s new 15.6km two-line light rail network, which is expected to open in July. The network will be operated by the Keolis Shanghai JV of the Shanghai Shentong Metro Group (51%) and Keolis, France (49%), under a five-year contract awarded in November 2020.