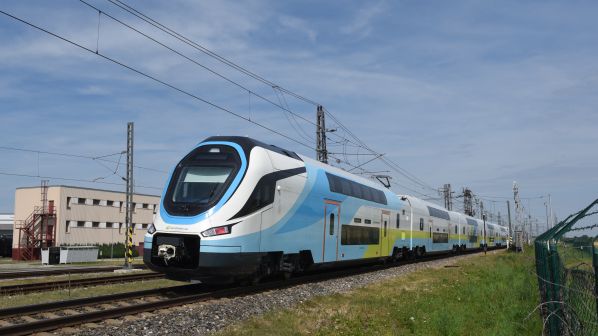 Train 100 002 after completing its first run on the large test ring at the Velim testing centre.
Photo Credit: Quintus Vosman

CRRC Zhuzhou has delivered the first six-car double-deck EMU ordered by Austrian open-access operator Westbahn to the Velim testing centre in the Czech Republic. The train made its first test run on June 22 to determine that it meets the conditions to run on the test line, before being prepared to undergo vehicle acceptance testing.

While the train has been designed and manufactured in China, it will need to meet European Union (EU) standards including Technical Specifications for Interoperability (TSIs).

Westbahn will lease the EMUs from CRRC to supplement its fleet of 15 six-car Kiss 3 double-deck EMUs ordered from Stadler in 2019.

The six-car CRRC EMU has two motor and four trailer cars, a maximum speed of 200km/h and can operate under 15kV and 25kV ac electrification. Each six-car unit has 571 seats across two classes, and features vending machines, wheelchair spaces, cycle storage and Wi-Fi.