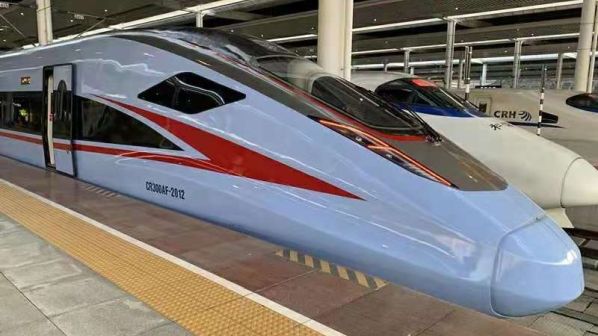 The eight-car 209m-long train consists of four powered cars and four trailers, and seats 613 passengers, including 48 in first class. The train is equipped with Wi-Fi and USB and power sockets in the seat arm rest, and seat numbers are marked with LED displays connected with the ticketing system.

CRRC Sifang has also introduced the first CR400AF-G EMU, an Alpine version of the CR400AF fleet, which debuted in June 2017, and is capable of operating at temperatures as low as 40oC. The first CR400AF-G operated from Beijing to Harbin.

The electrical components, car body, bogies, brakes and other major systems are designed with materials capable of withstanding low temperatures, while the train is sealed to prevent snow, wind and condensation from entering the coaches.

The undercarriage, bogies and couplings also equipped with covers to prevent snow from entering. Some bolts are manufactured from chrome-molybdenum and stainless steel in order to prevent them from becoming brittle in the extreme temperatures, while the water systems are equipped with heaters to prevent freezing.

The train can also detect wheel slippage and alter the braking force and spread sand to improve traction on ice.