Trains began operating between Stockholm and Hamburg on September 1. 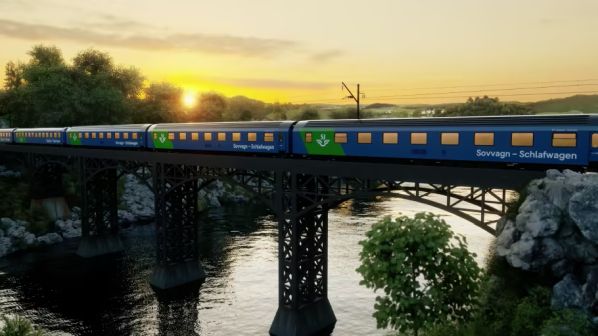 SWEDISH operator SJ has been forced to launch its overnight service between Stockholm and Hamburg without sleeping cars, after Danish authorities ruled that the rolling stock it was planning to use for the service is not authorised to operate in Denmark despite it being certified to operate in Germany and Sweden.

SJ launched the daily service on September 1 and trains are running with two couchette cars in each direction, with one couchette car held in reserve.

Swedish transport administrator Trafikverket awarded SJ a contract in August 2021 to operate a subsidised daily Stockholm - Hamburg overnight service for 244 days of the year, with SJ subsequently announcing it would continue to operate the service year-round on a commercial basis with the subsidy from Trafikverket not due to apply until the middle of September. SJ is in discussions with the transport authority over how this will be affected by the lack of rolling stock.

SJ contracted RDC Germany to operate the service in Germany while Hector Rail will haul the service in Denmark, as SJ is not certified to operate in these countries. RDC Germany was also due to provide the rolling stock for the service, as SJ’s existing fleet for its Swedish overnight trains is too wide for the loading gauge elsewhere in Europe. SJ was planning to operate each train with two sleeper cars, two couchette cars and a seating car.

Swedish rail news site Jarnvagar reports that SJ had planned to hire type WLAB32s coaches from Austrian Federal Railways (ÖBB) via RDC, which began modernisation in summer of 2021. However, RDC later informed SJ that the coaches would not be completed on time due to a component shortage for the new electrical equipment due to be installed. RDC offered to lend SJ type MUn coaches that were previously used to operate services between Austria and the German island of Sylt.

The coaches meet the International Coach Regulations (RIC) standards, which allow passenger coaches to be used for international services within Europe. RIC is given legal force through Article 54 of the EU Interoperability Directive and by the Convention concerning International Carriage by Rail (Cotif). Germany and Sweden have incorporated Cotif into their national legislation. However, while Denmark is a signatory to the Cotif Convention, it has not yet incorporated the relevant legislation that allows its transport authority to approve the coaches.

Due to this, Danish authorities advised SJ earlier this year that the sleeper and seating stock would need to be certified through the European Union Agency for Railways (ERA), which since June 2019 has authority to approve rolling stock for operation across Europe.

An SJ spokesperson told IRJ that it is now going through this process, but as it is a relatively new procedure, it is unknown how long it will take.

Denmark has agreed to certify some coaches if RDC can prove that they have been operated on the Danish network previously.

Tickets for SJ’s Stockholm - Hamburg service went on sale in April. However, due to the uncertainty around when it will be able to launch a full sleeper service, SJ has halted all ticket sales for the trains, and is offering to rebook passengers booked into the sleeper coaches onto other services or transfer them to the couchette cars.

The Swedish - German overnight market is growing, with Snälltåget announcing earlier this month that more than 120,000 passengers have travelled on its Stockholm - Malmö - Copenhagen - Hamburg - Berlin service since it was launched on June 27 2021, a 500% increase compared with the Malmö - Berlin service it replaced.