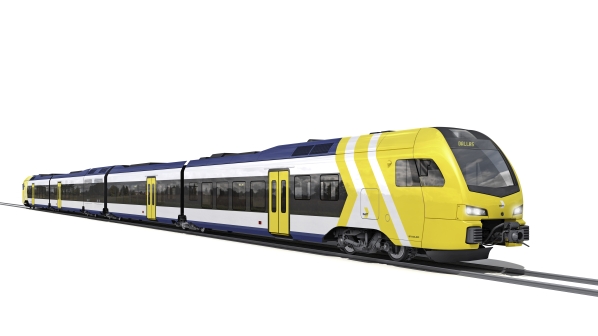 Stadler will also design an equipment maintenance facility (EMF) for the project, an east-west commuter rail line linking to the north of the city which was approved in September 2018. The 42km line from Dallas Fort Worth Airport (DFW Airport) and Shiloh Road in Plano will connect northern areas of Tarrant, Dallas, and Collin counties along interstate highway 635, one of the most congested road corridors in Texas.

The trains, which are due to enter passenger service by the end of 2022, will have capacity for 465 passengers, including 240 seated, and will comply with the Americans with Disabilities Act (ADA).

The trains will also be equipped with CCTV and an automatic passenger counting system, which can count the number of passengers boarding and alighting the train at each stop, detect huddling of passengers in certain areas of the train and blockages of boarding areas.

Each 81m-long DMU has four cars plus a power pack in the middle, which houses the power unit, with four powered axles and eight unpowered axles.