GERMAN Rail (DB) has announced an order worth €1bn for a further 30 Siemens Velaro ICE3 trains for delivery between December 2022 and 2026. The contract includes options for up to 60 additional trains. 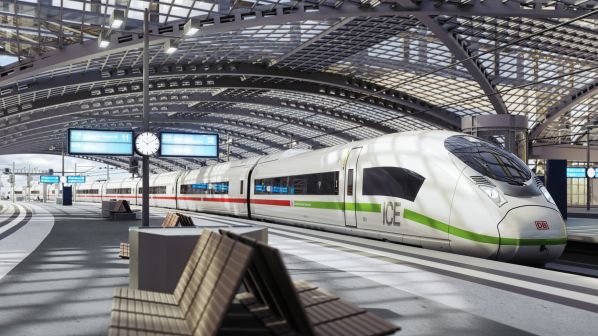 The new trains, designated Velaro-MS (Multi System) by Siemens can operate on several traction voltages in neighbouring countries and use the same design platform as the previous Velaro-D trains which are also multi-system.

DB tendered for up to 90 new ICE trains capable of international operation, and in September 2019 announced plans to buy these initial 30 trains after tendering for their manufacture from October onwards. Siemens will manufacture the trains in Krefeld with its site in Erlangen, Bavaria, set to supply electrical systems. Bogies will be supplied from Graz, Austria.

The 200m-long eight-car trains are designed for 320km/h operation with an output of 8MW and half the axles powered. The trains can operate in multiples of two and with the existing 320km/h Velaro class 407 trains, 17 of which were delivered between 2010 and 2012. DB plans to use the new trains to expand high-speed services between the Ruhr region and Munich using the Rhine Main high-speed line between Cologne and Frankfurt. Expanding the Velaro fleet will also enable DB to increase use on services to Paris and Brussels.

Train interiors have been redesigned with new bistro areas, storage space for bicycles and family friendly zones. Each train will have 440 seats. The new trains will be the first high-speed trains to feature Siemens’ new radio friendly glazing, which is designed to allow mobile phone signals to penetrate the glass and has already been deployed on the Desiro HC fleet used for RRX services in the Ruhr region. The German government is planning a new nationwide network for mobile communications as part of its post coronavirus economic stimulus, which will remove many existing gaps in coverage, especially in rural areas.

DB CEO Dr Richard Lutz explained at a press conference in Berlin on July 15 that the new trains will be used to operate additional very fast ‘Sprinter’ services, and that expansion of the ICE fleet to 411 trains by 2026 is a key step to building the fleet DB will need to deliver on plans to offer half hourly frequencies between major cities.

Analysis of DB’s ICE fleet plans shows the operator will retain all existing trains except the 11 five-car class 415 ICE-T trains and will operate all 137 ICE4 trains on order plus the additional 30 Velaro-MS by the end of 2026.

The ICE order secures thousands of jobs at Siemens and multiple independent suppliers. Scheuer also announced plans for a multi-million investment programme to renovate and upgrade 150 stations across Germany in the next year with the aim of creating business opportunities for SME companies in the construction sector.