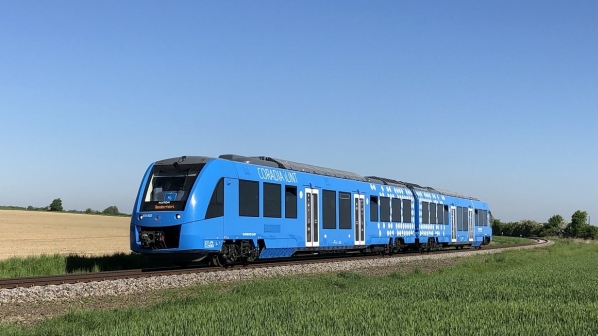 GERMAN Rail (DB) plans to issue a tender for the procurement of 16 hydrogen electric multiple units (HEMUs) for a prospective contract to operate the Line Star Network centred on Mühldorf in Bavaria.

The fleet order is optional and based on whether DB secures the operations contract, which is set to be overseen by Bavarian Railway Company (BEG). DB retains the right to order the trains for other tendered regional contracts and says there are financing facilities available for prospective manufacturers. The contract will include supply of spare parts and is likely to include maintenance of the fleet.

BEG could agree to delay the start of passenger services by the new operator on the Passau - Mühldorf and Burghausen - Mühldorf lines by a year to December 2025 if it decides to proceed with hydrogen traction. BEG is believed to understand the complexities of introducing hydrogen operation and possible delays to vehicle authorisation.

DB has set a deadline for a notification to participate from prospective bidders of 10.00 on June 1.

In addition, DB has issued a tender for the supply 17 EMUs with minimum capacity of 420 passengers and seven trains with a minimum of 540 seats for another prospective tender, this time for RE30 Frankfurt am Main Main Station - Gießen - Kassel Main Station line, which is part of the Main-Weser network. Rhine-Main Transport Authority (RMV) is overseeing the bidding process for this contract, which will commence in December 2024.

The order will include supply of spare parts and staff training. Bids to DB are due on June 10 at 12.00.

Vias Rail, a subsidiary of Rurtal Rail, has also issued a tender for new trains in the event it secures the Main-Weser contract. The operator requires 15-25 EMUs and plans to select a winning bidder following accelerated negotiations with three pre-selected manufacturers.

For the latest global rail tenders from around the world, subscribe to IRJ Pro.