The order is a follow on from a €1bn contract for 30 high-speed trains awarded in July 2020. 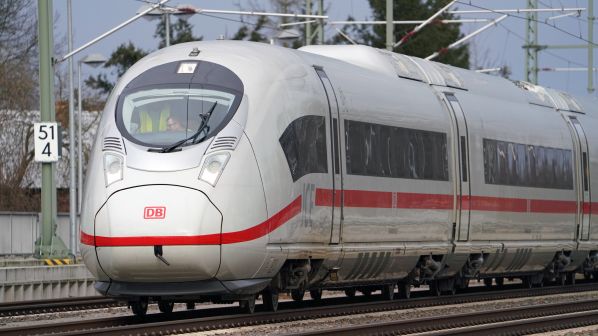 GERMAN Rail (DB) has ordered an additional 43 ICE 3neo high-speed EMUs from Siemens for around €1.5bn. The order follows a €1bn deal for 30 of the high-speed trains in July 2020 which included options for up to 60 additional trains.

The latest order was announced by the CEO of DB, Dr Richard Lutz, and Siemens CEO, Mr Roland Busch, in the presence of the federal minister for digital affairs and transport, Dr Volker Wissing, during the unveiling of the first ICE 3neo type at the ICE plant in Berlin-Rummelsburg during the announcement of the new contract.

The new class 408 trains, an improved version of the previous Velaro-D/DB class 407, will expand DB’s ICE fleet to around 450 sets by the end of 2030 and will increase capacity on long-distance services by 32,000 seats, giving DB the capability to meet the requirements of the regular interval timetable that is expected to be introduced in 2030. The trains are also expected to eventually be used on international services.

The eight-car trains will have a top speed of 320km/h, with seating for 439 passengers including 99 in first class. This includes 16 seats in a family compartment, five in a toddler compartment and 16 in an onboard restaurant. The train will also have two wheelchair spaces and a power lift to allow wheelchair users to access the train.

Lutz told the launch that the new trains will primarily be used on longer inter-city routes where maximum use of their top speed can be made while the 250km/h ICE4 fleet, which is also still being delivered by Siemens, will be used on routes with lower line speeds and more frequent stops.

The 8MW train has 16 bogies with 32 axles, half of which are powered. The 200m-long train weighs 460 tonnes when empty, and will also feature special window glass to ensure stable mobile phone reception. There are eight bicycle spaces, redesigned luggage racks providing more storage space, lighting that changes colour tones depending on the time of day, tablet holders and power sockets at all seats, including in standard class, and 12 doors to improve boarding and alighting times. The trains also have 11 toilets, including one staff toilet and one which is wheelchair accessible.

The first ICE 3neo from the original contract is due to enter service with the December timetable change and will initially operate between North Rhine-Westphalia and southern Germany on the high-speed route via Cologne and the Rhine/Main valley.

Siemens’ Krefeld plant will responsible for most manufacturing with components supplied by other Siemens plants, including bogies from Graz, Austria, as well as 230 sub-contractor suppliers in Germany.

“More rail is the key to climate protection in Germany,” Lutz says. “That’s why everything speaks for expanding climate-friendly rail transport - and that’s why we’re holding to our course for growth and investment. With the new ICE, we’re not only providing more capacity in our trains, but are also enhancing the quality and comfort for our passengers. Our customers can already look forward to the next timetable change in December.”

“The new ICE stands for progress on the rails - fast, digital, barrier-free,” Wissing says. “The 73 new trains with their additional 32,000 seats will make a major contribution to implementing the country’s synchronised timetable for nationwide service. This will bring us another step closer to our goal of doubling the number of rail passengers in the next eight years.”

“Today we are taking an important step in the mobility transition,” Busch says. “With our new high-speed trains, we’re supporting DB in realising its vision: transporting more people with maximum comfort, punctuality and better service, and doing so efficiently and with the greatest sustainability. We’ll be putting the first trains in service at the end of this year. We’re achieving this at record speed because we are working on the basis of a long-standing, trusting partnership with DB, and are relying on a proven train platform that we’ve enhanced with numerous innovations for the passengers.”