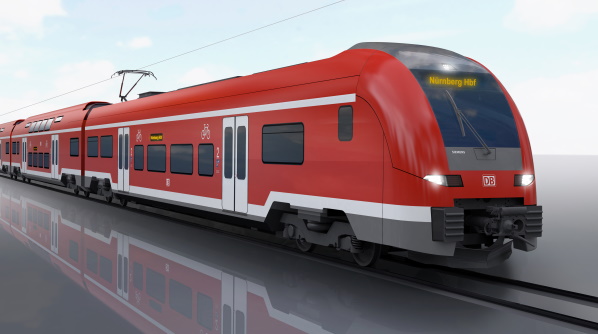 The order comprises 25 double-deck four-car Desiro HC EMUs and six single-deck four-car Mireo EMUs, which are planned to enter service from December 2024, following DB Regio’s takeover of services on the network under a 12-year contract awarded in October 2020.

The Desiro HCs will be primarily used on the RE 3 Munich - Landshut - Plattling - Passau line, and will also be used to operate services on the RB 33 Munich - Freising - Moosburg - Landshut line until the opening of the Munich S-Bahn’s Trunk Line 2 in 2026.

Following the opening of Trunk Line 2, the trains operating on RB 33 will be used to increase capacity between Munich and Regensburg or Plattling during peak times.

The Mireo trains will be used to operate airport express services on the RE 22 Munich Airport Terminal - Landshut - Regensburg route.

Both trains are designed to provide high levels of accessibility from the region’s 76cm standard-height platforms and are equipped with a power lift to provide easy access for wheelchair users at low platforms. The trains will also offer multi-purpose areas near entrances for use by wheelchair and pushchair users and will be equipped with passenger information systems and Wi-Fi.

Financing of the new fleets will be supported by a debt guarantee service granted by Bavarian Railway Company (BEG).

DB Regio Bavaria previously ordered a fleet of 18 four-car and eight six-car electric Desiro HCs from Siemens in 2020 to operate on the Franconian-South Thuringia network in preparation for its takeover of services in December 2023. DB Regio won the concession in May 2020, and the contract covers the operation of 5.7 million train-km annually, connecting Nuremberg and Bamberg with Würzburg, Saalfeld, Sonneberg and Erfurt.

The Franconian-South Thuringia fleet is equipped with predictive diagnostics technology. Additionally, trains for the RE 19 Nuremberg - Erfurt/Sonneberg line will run on the VDE 8 high-speed line at a top speed of 190km/h, and feature pressurised coaches and ETCS train control.