GERMAN Rail’s DB Regio business unit has ordered another seven Mireo EMUs from Siemens and 19 Coradia Continental EMUs from Alstom for its Karlsruhe 7b network contract. 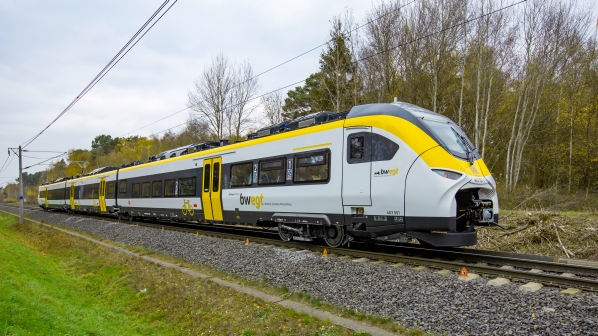 Siemens Mireo EMU being tested at the Wildenrath test track.

The trains are being procured by DB Regio on behalf of Baden-Württemberg Ministry of Transport but will be owned by Landesanstalt Schienenfahrzeuge Baden-Württemberg (SFBW) which will lease them to DB Regio for the 13-year contract.

The three-car Mireo trains will be delivered at the end of 2022 for operation on the Karlsruhe - Bruchsal - Heidelberg/Mannheim North Baden Express.

Each articulated Mireo train has more than 200 seats. It has a lightweight construction, energy-efficient components and an intelligent network management system which Siemens says will reduce energy consumption by up to 25% compared with its previous generation of EMU. Mireo also has an aerodynamic design and quiet bogies to reduce the noise.

“This order marks the third Mireo order we’ve received from DB Regio in less than three years,” says Ms Sabrina Soussan, CEO of Siemens Mobility. Mireo trains are being introduced in the Rhine Valley and on the Rhine-Neckar S-Bahn.

The Alstom order comprises 13 five-car and six three-car EMUs and the trains will be built at Alstom’s Salzgitter plant.

For more information on rolling stock orders around the world, subscribe to IRJ Pro.