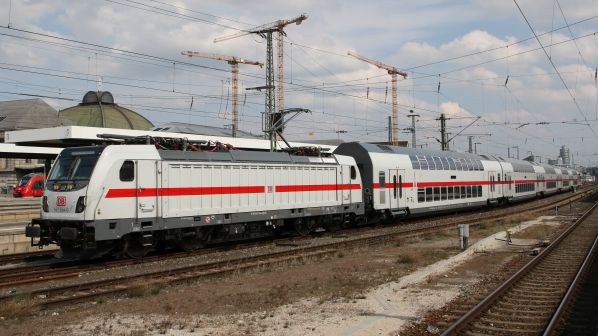 DB ordered 69 of the trains in three tranches with all versions of the IC2 train using the same five-car formation of Bombardier Twindexx double-deck coaches with a driving trailer at one end.

The first 25 utilise a class 146.5 Traxx AC2 15kV ac locomotive and have been in service since late 2015, mostly on routes between Emden/Cologne and Leipzig/Dresden via Hannover. Despite some early teething problems with the Twindexx vehicle's suspension these trains have performed well in recent years. The class 146 design is a well proven locomotive used widely for regional trains in Germany.

However, the following two batches have not fared as well.

These trains use Bombardier’s more modern Traxx AC3 class 147.5 locomotive. The first batch of 17 trains was delivered in 2018-2019 but have suffered from frequent reliability issues, which appear to derive from problems with software.

The trains are largely in service on the Nuremberg - Stuttgart - Karslruhe route and on the inter-city route between Stuttgart and Singen. Use on the international Stuttgart - Singen - Zürich service is delayed due to approval problems in Switzerland - especially concerning the use of ETCS.

The next batch of 25 units, ordered in 2017, were due to be delivered in 2019 although only the first four trains entered service in late 2019; the first two in August and two more by December.

These trains again have experienced significant software-related failures with trains stopping unexpectedly and train drivers reportedly spending up to an hour re-booting onboard systems. These problems appear to be exacerbated by frequent changes of direction at terminus stations, which is a feature of the routes they serve, with multiple direction changes each day.

DB has decided not to accept any more of the 25 remaining IC2 trains into service - 21 are yet to be delivered - until the reliability issues have been resolved. Bombardier has told local media that it is working with DB to resolve the problems and regrets the inconvenience the train failures have caused passengers.

The IC2’s software problems are in addition to severe delays with the delivery of trains by Bombardier, notably new EMU fleets in Germany and Britain.