THE driver of the Caledonian Lowlander sleeper service had lost all control of the coach brakes due to a closed cock when the train overshot its platform by 650m on August 1 2019, an investigation has found. 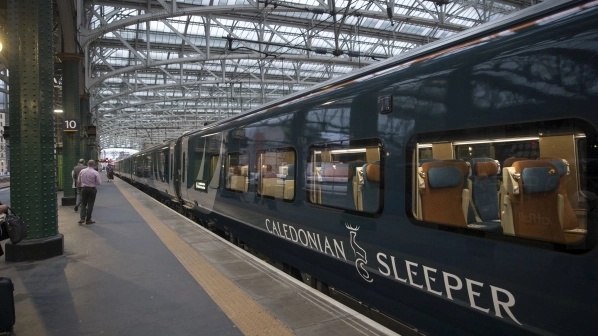 The incident at Edinburgh Waverly station triggered an investigation by Britain’s Rail Accident Investigation Branch (RAIB), which released its report on May 28.

At about 07:25, the driver of the London Euston - Edinburgh overnight train found he was unable to control the train’s speed on the approach to Edinburgh, and was unable to comply with the maximum permitted speed at Haymarket East Junction. RAIB says the driver would not have been able to stop the train before the junction if there had been conflicting train movements.

The train then travelled to Edinburgh Waverley station, where it was unable to stop at platform 11. The service was eventually brought to a stop 650m beyond the end of the platform after the train manager triggered an emergency brake from a coach.

The crew subsequently found that an air isolation cock between the locomotive and the coaches was closed when it should have been open. The driver then received permission from the signaller to reverse back into the platform where the passengers alighted. The incident did not result in any injuries or cause any damage.

The new £150m fleet of sleeping coaches manufactured by CAF was introduced on the Lowlander route by Serco Caledonian Sleeper on April 28 2019.

RAIB confirmed the crew's account of the incident that the driver was unable to stop the train because the brake pipe isolating cock on the leading end of the lead coach was closed. This prevented the driver from activating the brakes on all of the coaches, although the driver still had control of the locomotive's brake systems.

The investigation found that the isolating cock closed during coupling of the locomotive with the coaches when the Edinburgh portion of the train was split from the Glasgow portion at Carstairs station and after the mandated brake continuity test had been completed. The valve closure was not detected before departing from Carstairs, and the effectiveness of the brake systems on the locomotive masked the absence of the coach brakes until the train was approaching Slateford, near Edinburgh.

The first is addressed to the Rail Safety Standards Board (RSSB), recommending a change in the wording of the railway rule book to make it clear that the brake continuity test should be undertaken after all coupling-related activities have been completed.

The second is addressed to Caledonian Sleeper, recommending a review of the vulnerability of the isolating cocks on its rolling stock, to prevent inadvertent operation by staff or objects.