Two more will be delivered in January to haul trains from the Europipe works in Mülheim to Dortmund’s inland port. 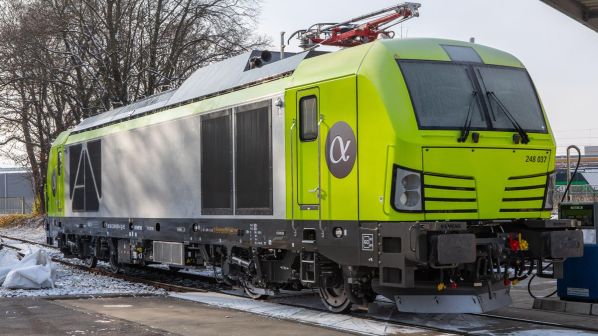 The first of the Siemens Vectron Dual Mode locomotives to be delivered to Captrain Germany Group, which is leasing them from Alpha Trains.
Photo Credit: Alpha Trains

DORTMUND Railway (DE), which is owned by Captrain Germany Group and Dortmunder Hafen, has taken delivery of its first Vectron Dual Mode locomotive from Siemens.

The Vectron Dual Mode has been designed to operate on both electrified and non-electrified lines by either taking power via a pantograph from overhead wires or using its powerful diesel engine on other routes.

With a length of almost 20m and a maximum output of 2.4MW in electric mode and 2MW in diesel mode, the Vectron Bo-Bo locomotive can reach a top speed of 160km/h. The locomotive can be operated on electrified lines at 15kV 16.7Hz. The maximum starting tractive effort is 300kN.

DE is leasing the locomotive from Alpha Trains and from January it will begin running five times a week from Mülheim an der Ruhr in North Rhine-Westphalia to Brake on the lower Weser, near Bremen, to transport large pipes from the Europipe works to the Lower Saxony inland port. Later the same month, two more locomotives of the same series are due to be delivered to Dortmund.

Captrain Germany Group has a fleet of more than 200 locomotives to which a number of dual-powered machines have been added in recent years and there are currently 13 of those in operation. During 2023 eight more Stadler Eurodual and Siemens Vectron Dual Mode locomotives are due to be added to the fleet to enhance the operator’s environmental and sustainability credentials as it seeks to promote the benefits of rail transport for freight in reducing the CO2 emissions from road haulage.