The trains will now enter service in mid-2025. 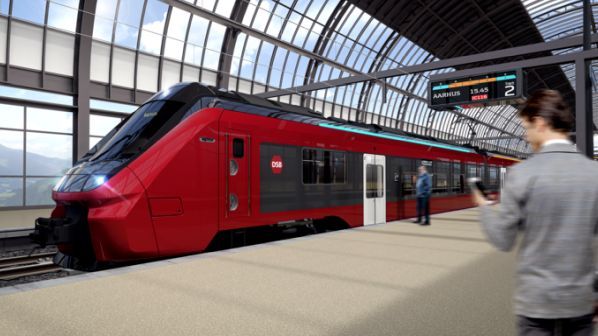 The fleet has been dubbed the ‘train of the future.’
Photo Credit: Alstom

DANISH State Railways (DSB) has announced that the delivery of 100 Alstom EMUs will be delayed by around six months, less than a year after the contract for the trains was signed.

DSB says this is due to a combination of several factors, including a number of changes to the design of the trains, as well as uncertainty facing suppliers around the world. The trains are now due to enter service in mid-2025, instead of the original schedule of December 2024.

“It’s not unusual for procurement projects of this magnitude to have their schedules adjusted,” says DSB director of strategy and train material, Mr Jürgen Müller. “With the additional timeframe to take into account the challenges mentioned, there is the right time and breathing space for Alstom to deliver the trains as provided and DSB to receive and commission them in the best possible way.”

“We have made a very good start to our cooperation with DSB on Coradia Stream and work is progressing well,” says Mr Emmanuel Henry, CEO of Alstom Denmark. “We are confident that together with DSB we will deliver an innovative and reliable train to the Danes with high passenger comfort.”

DSB and Alstom signed a €2.6bn framework contract for the supply of up to 150 EMUs and associated maintenance in June 2021 after an appeal lodged by Stadler was dismissed by Denmark’s Court of Appeal.

Described as the largest single investment in the history of DSB, the order comprises the initial firm purchase of 100 single-deck five-car Alstom Stream EMUs as well as maintenance over 15 years for €1.4bn.

The contract includes options to purchase up to 150 trains and extend the maintenance period to 40 years. The new trains will replace the IC3, IR4 and IC4 diesel fleets, which will be withdrawn from service as Denmark proceeds with its national electrification programme.

Alstom will assemble the 200km/h EMUs at its plant in Salzgitter, Germany. The trains will be adapted to Danish operating conditions and are based on Coradia Stream sets that Alstom is delivering to Netherlands Railways (NS). They will be equipped with Alstom’s Atlas onboard ETCS Baseline 3 equipment along with an STM to support use with Denmark’s legacy signalling system. The EMUs will each have seats for 300 passengers.

DSB began planning the fleet order in 2014 and is partly financing the procurement through a €500m loan from the European Investment Bank.