GRAMPET’s Romanian maintenance subsidiary Electroputere VFU has completed the production of its first DMU, with the vehicle leaving its manufacturing facility in Pascani to begin the certification process. 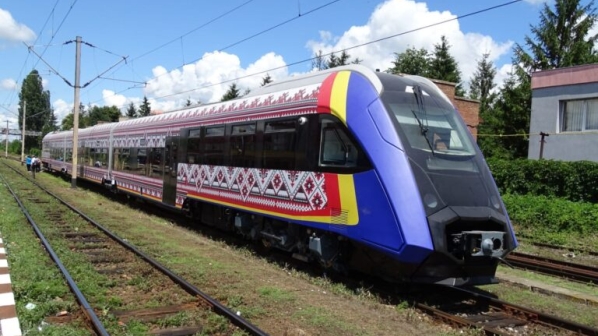 Production began in 2014, with more than 180 specialists from Electroputere VFU involved in the project. The DMU is designed to operate in Europe, but can also be adapted to operate on non-EU networks.

The train consists of parts and subassemblies produced in Romania, along with subassemblies provided by other European manufacturers. The DMU has a top speed of 120km/h, and capacity to seat 164 passengers, including 22 in first class.

The cars are equipped with eco-friendly toilets, including some designed for passengers with reduced mobility, as well as Wi-Fi, air-conditioning, power outlets, and a visual passenger information system that indicates the destination, next stop, delays and other relevant information.

“The DMU represents the debut of Electroputere VFU in the segment of new railway vehicle construction,” says Grampet president, Mr Gruia Stoica. “We set out, through this visual identity option, to celebrate both Romanian folk traditions and industry traditions as a whole.

“After approval, this model will be available for purchase in several countries in Europe and beyond, thus becoming a tool to promote the spirit and engineering of Romania.”

The train is expected to enter service with Moldovan Railways.

Electroputere VFU largely focuses on high value-added activities, such as the redesign, reconstruction and modernisation of railway vehicles. It currently has customers in Romania, Belgium and Gabon. In 2019, railway vehicle modernisation represented 68% of the company’s business, ahead of maintenance (26%) and assemblies and subassemblies segment (5%).

The factory currently employs 650 staff, but this could be expanded to nearly 5000 depending on the work load.