Estonian operator’s move comes on top of an order for 16 vehicles already in production. 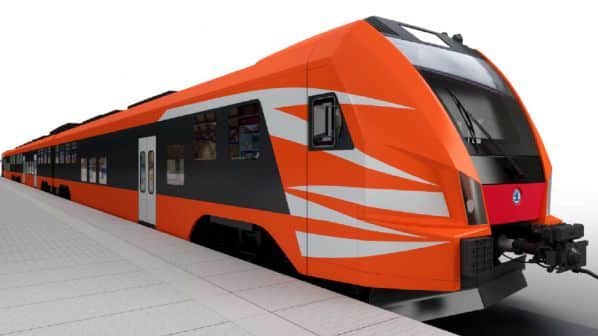 An impression of how the Škoda EMUs being built for Elron will appear when in service.
Photo Credit: Škoda Group

ESTONIAN rail operator Estonian Line Trains (Elron) has exercised an option to order 10 additional EMUs from Škoda Group in addition to the 16 trains already in production at the manufacturer’s plant in Ostrava, Czech Republic.

The order is now said by Škoda Group to have a total value of almost €147m.

The 1520mm-gauge trains will be equipped to take traction current at both 3kV dc and 25kV 50Hz ac, so that they can operate both on legacy and newly electrified lines, including the 190km route between Tallinn, Estonia’s capital, and Tartu, its second city. A project to electrify the line will be completed by the end of 2024.

As well as being equipped with air conditioning, a passenger information system, Wi-Fi, and 230V and USB sockets, the new trains will have a low-floor entrance for the benefit of passengers with reduced mobility, together with space to accommodate two wheelchairs and four pushchairs.

The trains will feature both first and second class accommodation while some of the seats will be removable so that the train can offer more space for bicycles in summer, and extra passengers during the winter months. Some trains will also feature onboard catering facilities.

Elron announced that Škoda Vagonka was the winner of a €56m contract to supply six dual-voltage EMUs in November 2020, with delivery expected in the second half of 2024. As well as the option now being exercised for 10 more trains, the contract covered provision of spare parts for five years.