Six-year repair programme to the Hitachi-built trains will include trains not yet manufactured. 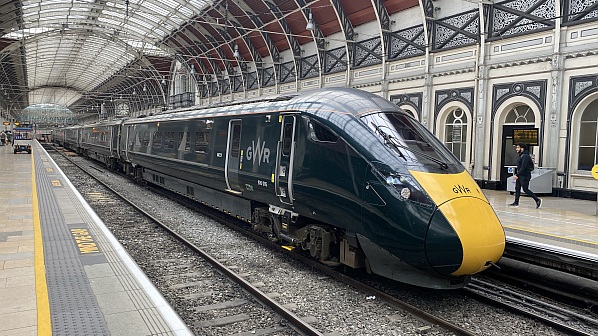 MORE than 1200 class 800 series vehicles built by Hitachi for various British operators require modifications to rectify issues with cracks found on the bodyshell and anti-roll bar fixing points, according to a report published by British regulator the Office of Rail and Road on April 7. The repair programme will last for six years.

The 182 trains were withdrawn by their operators after the discovery of the cracks in May 2021. Following stringent checks, the majority of the trains were able to return to service. However, the ORR launched a review into the cause of the problem.

At the time there were 93 trains operated by Great Western Railway (GWR), 65 by London North Eastern Railway (LNER), 19 by TransPennine Express (TPE) and five by Hull Trains (HT). The trains are mixture of five and nine-car formations, and are either bi-modes or EMUs.

The ORR has concluded that fatigue cracking on the vehicle body in the area above the wheels close to the yaw damper bracket and anti-roll bar fixing points was caused by the trains experiencing greater loads from train movement than allowed for in their original design. The ORR says it is not yet known why this happened, although potential factors include wheel wear and track design. The ORR says in its report that there is no suggestion of problems with the infrastructure.

Additional cracks found in the area where the lifting plates attach to the vehicle body were the result of stress corrosion cracking (SCC). The ORR says this is the result of using a particular type of 7000 series aluminium in various areas of the class 800 series.

The report says that the characteristics of the specific aluminium used in combination with built-in stresses resulting from being welded to the body as well as exposure to air containing high levels of chloride resulted in the cracking. The ORR says that the British atmospheric conditions contain strong levels of chloride, and this appears to have caught the industry by surprise.

To ensure further safety improvements, the ORR is recommending that:

A programme of repairs will be carried out on 1247 class 800 series vehicles from GWR, HT, LNER, TPE and the Lumo class 803s, which entered traffic in October-December. A further 487 class 385 and class 395 vehicles will also be treated. This does not include the class 805 and 807 fleets, which Hitachi is currently manufacturing for Avanti West Coast (AWC). However, these will be included in the repair programme, albeit towards the end of the project. The ORR says the focus will initially be on the trains which require the repairs.

The class 800 series modifications will be carried out by Arlington Fleet Services at Eastleigh Works, Hampshire, and it is expected that at least one train will be out of service at any one time. The planned six-year timeframe is designed to ensure that service levels are not affected by a lack of available trains.

The ORR is working with Hitachi and partners to agree a permanent solution. Once the programme is formally agreed, work is expected to start this summer. No specific date has been confirmed.

Hitachi plans to remove the affected part of the original body structure, including the longitudinal welds where the fatigue cracks have occurred, and the mounting brackets. The structure will be rebuilt using a modified design, and which provides an unchanged interface with the yaw damper bracket and anti-roll bar. The ORR says the modifications address the load capability of the design and the potential for insufficient fusion in the welded joint arising from weld design and inspection criteria.

Hitachi has also proposed adding bolts to retain the plate in the unlikely event that the welds fail completely as a result of SCC.

On April 7, GWR had only one class 800 series train out of service due to cracks, and that was the train used for the investigations. It is understood that 27 GWR trains have received repairs to cracks to enable them to continue operating.

“The ORR’s report identifies that all Hitachi trains meet relevant standards and that we took the appropriate action to prioritise safety and maintain train availability,” said a Hitachi spokesperson. “The proposed engineering solutions outlined in the report are currently being reviewed by all partners. We are working together to finalise the plan for their implementation, while always prioritising safety and train availability to support consistent passenger services.”

The class 800 series was ordered initially by the Department for Transport (DfT) as part of the Intercity Express Programme (IEP) designed to replace High Speed Trains (HST) and other fleets on the Great Western route and East Coast Main Line. Agility Trains funded the trains, with subsequent orders placed by other rolling stock leasing companies for specific operators.