ETIHAD Rail, UAE, has awarded a contract for the manufacture, supply and commissioning of 842 new freight wagons to CRRC Yangtze following a virtual signing ceremony on August 4. 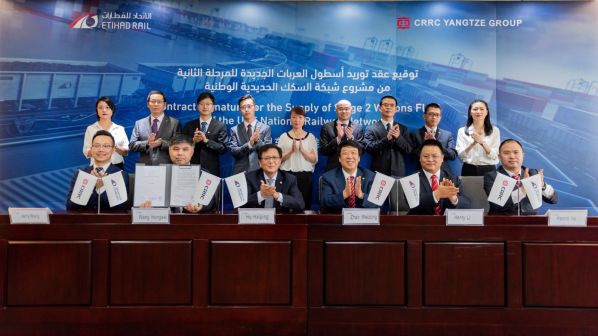 The contract was signed during a virtual signing ceremony.

The order is intended to provide Etihad Rail’s rail freight operations with greater capacity, flexibility and frequency, reducing the cost of service and encouraging a modal shift away from road freight. It follows an order by the railway for 38 3.35MW EMD locomotives from Progress Rail in February.

The order comes as construction of the Stage Two expansion project continues to progress, with a projected completion date of 2024. The 605km line will run between Ghuweifat on the border with Saudi Arabia, via Mussafah, Khalifa and Jebel Ali, to the city of Fujairah on the Gulf of Oman. The line will connect all major industrial ports and trading centres within the UAE, significantly enhancing transport links.

The line will connect to Etihad’s existing 264km Stage 1 network, completed in 2015, which is primarily used for the transport of sulphur from Shah and Habshan in the Al Dhafra region to the Persian Gulf port of Ruwais. CRRC (formerly CSR) also supplied Etihad Rail’s existing fleet of 240 covered wagons.