Freight capacity to be increased to 60 million tonnes a year. 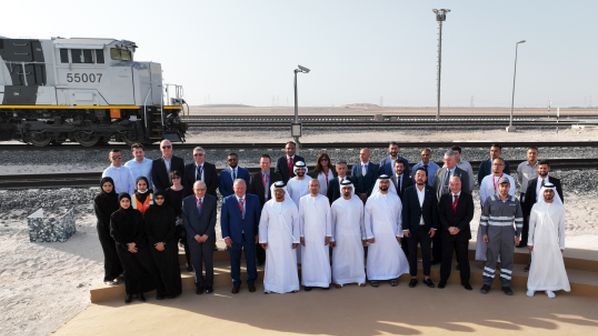 ETIHAD Rail, the developer and operator of the national rail network in the United Arab Emirates (UAE), says it has achieved another milestone with the arrival of the first batches of its new rolling stock fleet.

The first EMD SD70 diesel locomotives and multi-purpose wagons, which are designed to carry all kinds of goods with the aim of increasing the capacity of the rail network to carry 60 million tonnes per year, reached the UAE via the ports of Zayed and Al Musaffah.

The first deliveries were marked by an unveiling event at in Mirfa City, in the Al Dhafrah region of Abu Dhabi, attended by Mr Shadi Malak, CEO of Etihad Rail, alongside Mr Marty Haycraft, president and CEO of Progress Rail, and Mr Henry Pang, executive director, MENA, at CRRC.

The 38 new locomotives, ordered in February 2020, and 842 wagons, the contract for which was awarded in August 2020, and which have been designed specifically to withstand the region’s geographic and climatic conditions - including high temperatures and humidity levels - will operate across the whole Etihad Rail network upon its completion.

The UAE Railways Programme aims to increase the volume of freight and passengers transported by rail, developing a land transport system that links cities, increases sustainability and reduces pollution over the next 50 years. Etihad Rail reported in June that it had awarded CAF, Spain, a Dirhams 1.2bn ($US 326.7m) contract to design, manufacture, supply and maintain push-pull diesel passenger trains meeting European standards with a maximum speed of 200km/h and with capacity for more than 400 passengers. The aim is that passenger trains will connect 11 cities and regions in the UAE. CAF said the base contract is worth more than €250m but the number of trains included in the contract was not disclosed.

Etihad Rail aims to increase its current number of freight locomotives sixfold, to give it a fleet of 45. The EMD SD70s are being supplied by Progress Rail.

The locomotives provide 3.38MW  and are able to haul 100 wagons. They are also equipped with a pulse sand filtering system for desert operation and onboard ETCS Level 2.

The wagon fleet will increase threefold to a total of 1000 multi-purpose wagons, supplied by CRRC. Etihad Rail says claims the new fleet will contribute towards reducing carbon emission by 70%-80%.

“We made sure that the company’s new fleet is among the most modern in the region and the world, providing the highest safety criteria in terms of design, ensuring the best specifications for sustainability and environmental protection, and integrating the latest technologies for train operation and monitoring,” says Mr Mohammed Al Marzouqi, executive director of rail relations sector at Etihad Rail.

The new locomotives and wagons will be stored at Etihad Rail’s Al Mirfa facility until construction work on the UAE national railway network is completed.