The hydrogen system has been installed on a Renfe Civia EMU. 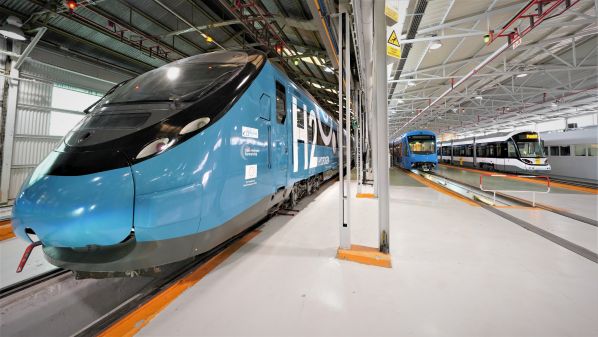 The testing will take place in CAF's plant in Zaragoza.
Photo Credit: CAF

CAF has begun static testing of a hydrogen-powered demonstrator train at its plant in Zaragoza for the FCH2Rail project, which is being implemented by a consortium of CAF, DLR, Toyota, Renfe, Adif, CNH2, IP and Faiveley Stemmann Technik.

The demonstrator train is based on a Renfe Civia commuter EMU, which has been equipped with a new hybrid power generation system that uses both hydrogen fuel cells and batteries. This system has been integrated into the vehicle’s existing traction system, allowing the train to operate in electric mode on electrified lines and in hybrid mode on catenary-free sections.

All the equipment for the new fuel cell hybrid powerpack has been tested, and CAF has carried out the mechanical, electrical and hydraulic work to install it on the Civia EMU. The next stage is to conduct tests to validate the integration of the new system.

One of the first tests will check the correct installation and integration of the new powerpack, by verifying all the interfaces and their correct operation together with the equipment already installed on the vehicle. The integrity of the hydrogen system will also be tested, after which the first hydrogen fuelling can take place and hydrogen supplied to the fuel cells. Once this has been completed, all the energy required by the train can then be obtained through the new hybrid system.

All hydrogen used during the tests is renewably-sourced and supplied by Iberdrola after the signing of a contract with CAF in February.

CAF says the start of the tests confirm the “considerable effort” made by the consortium since the launch of the FCH2RAIL project in early 2021 and represents an important milestone in the project, given that it permits the optimisation of the operation of the hybrid system directly on the train with all its legacy interfaces.

Once testing has been completed at CAF Zaragoza, the unit will start the dynamic tests on an external track, which are planned for this summer.

The project has a €14m budget, €10m of which is being funded by the Clean Hydrogen Partnership, formerly FCH2 JU, a European Commission agency dedicated to promoting the development of hydrogen and fuel cells.