The first of two locally-built passenger locomotives has been delivered to Argentinian Trains. 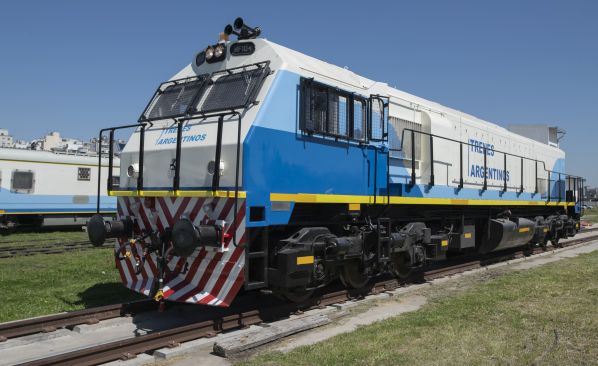 ARGENTINEAN Trains has taken delivery of the first of two new six-axle 1676mm-gauge diesel locomotives being built in Argentina by Materfer at its plant in Córdoba province.

The locomotives are the first domestically built main line locomotives for many years and are designed to haul passenger trains. During the last decade all new locomotives delivered for operation in Argentina have been built in China.

The type MTF3300 locomotive is new design which is capable of conversion to metre and standard gauge by exchanging the bogies. The 1676mm-gauge version weighs 114.77 tonnes and is powered by a 16 cylinder, 4.92MW, EMD 16-645-E3B reconditioned engine. Materfer took the engines for the new locomotives from four BNSF SD40-2 locomotives it acquired from the United States in the last decade.

Argentinean Trains intends to use the new locomotives, which have a maximum speed of 130km/h and 6000 litre fuel tanks, to expand passenger services on the Sarmiento Line in the near future. Services that currently operate from Buenos Aires Once to Bragado will be extended further west to Pehuajó, although the precise timescale for this is currently unclear.For more data on locomotive fleet orders around the world, subscribe to IRJ Pro.