Indonesia’s first high-speed line is on course to open in June 2023. 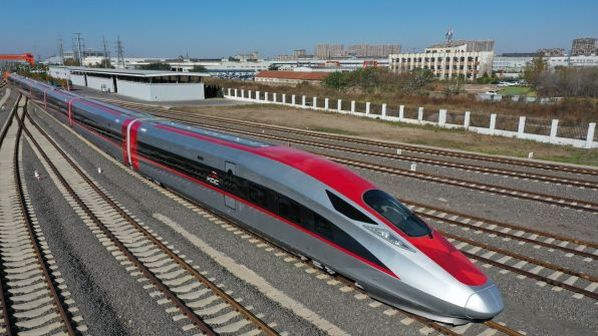 An image showing how the CRRC-built high-speed trains for Indonesia will look once they enter service.
Photo Credit: CRRC

THE first batch of high-speed trains to have been manufactured in China for the Jakarta - Bandung line have arrived at the port of Jakarta.

The first two trains to arrive were being transported from the port by road to Tegalluar Depot to be assembled initially into one unit.

It is the first time that high-speed trains made in China have been exported and the first 350km/h Yawan train was completed in early August. The eight-car Yawan trains each consist of four motor and four trailer cars with capacity for 601 passengers. Indonesia's transportation minister, Mr Budi Karya Sumadi, says the high-speed trains are equipped with advanced technology called Grade of Automation (GOA) Level 1 and are built to a slim design enabling them to reach the 350km/h speed.

The first batch from China comprises one Yawan high-speed train and one inspection train for Indonesia’s first high-speed line, which will cover a distance of 142km. It is estimated that the new line will cut the journey time from Jakarta to Bandung, the main city of West Java province, from 3 hours to around 40 minutes. There will be four intermediate stations.

The project is being overseen by Kereta Cepat Indonesia-China (KCIC), a consortium of Indonesian and Chinese companies which says that the trains will be the fastest in Southeast Asia.

The trains, which left the port of Qingdao in China’s eastern province of Shandong two weeks before their arrival on September 2 in Jakarta, have been built by CRRC Qingdao. The manufacturer is due to ship another 10 high-speed trains to Indonesia for the Jakarta - Bandung line, which is part of China’s Belt and Road Initiative (BRI).

The trains are due to be shipped from China in four batches, with the last batch due to arrive in Indonesia in March 2023. The next batch is due to arrive from China on December 25, 2022, then subsequent batches on February 25 and March 15, 2023.

Despite delays due to cost overruns, construction of the new railway is around 80% complete, tracklaying having commenced in April. The completed high-speed line is due to be ready for operation in mid-2023.

“The target is to get the line operational in June 2023,” said second deputy minister of state-owned enterprises Mr Kartika Wirjoatmodjo while witnessing the arrival of the trains at Pier 200-2021 Tanjung Priok Non-Container Port, Jakarta.

Wirjoatmodjo said that trials of the high-speed trains would be conducted in November of this year, before adding: “Thank God the first Jakarta-Bandung high-speed train series has arrived in Indonesia. It is good news for the country and shows Indonesia can compete with other developed countries. We will conduct a trial in November 2022 coinciding with the G20 Summit. We will test the trains on the Tegalluar-Kopo track."

The G20 Summit is due to take place in November in the Indonesian island of Bali and to be attended by the heads of government of South Africa, the United States of America, Saudi Arabia, Argentina, Australia, Brazil, India, Indonesia, the United Kingdom, Italy, Japan, Germany, Canada, Mexico, South Korea, Russia, France, China, Turkey and the European Union.