The 11-car trains will be deployed Moscow Central Diameters lines 3 and 4. 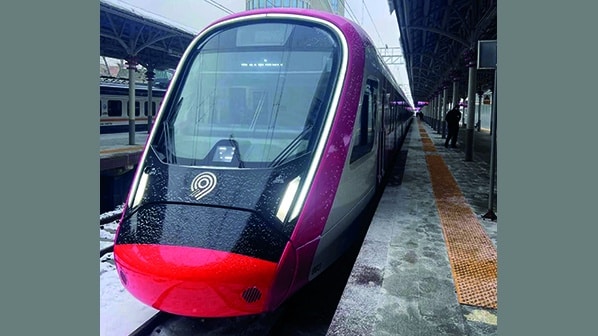 TESTING of the first of 44 new-generation Ivolga 3.0 EMUs delivered to Moscow Metro is underway ahead of introduction on the future Moscow Central Diameters (MCD) MCD-3 and MCD-4 commuter lines.

The new Ivolga 3.0 trains are 100% Russian-made having been produced at the Tver Carriage Works, a subsidiary of Transmashholding (TMH), which will also provide maintenance.

The requirements of the original tender from the Central Exurban Passenger Company (CEPC) were for the EMUs to offer a design speed of at least 160km/h and an average acceleration of at least 0.9m/s2 - a performance requirement TMH says matches the capabilities of the new-generation Ivolga trains, first revealed in 2021.

The 11-car trains are being tested without passengers and some of trains have already completed their running-in period, Moscow Metro says.

Compared with the previous Ivolga model, which has been deployed on suburban lines around Moscow including the Central Diameters, the new 11-car EMUs will offer 50 additional seats and include features for improved passenger comfort such as folding armrests, USB chargers at every seat and additional electric scooter chargers. The trains also have wide doors, space for wheelchairs and cycle racks for bikes with wider wheels.

The new trains have been purchased by the Moscow Metro using part of an infrastructure loan allocated by the Russian government in October 2021, together with a second loan, approved in July 2022, bringing the total to Roubles 106bn ($US 1.7bn).

These infrastructure funds are being used to purchase rolling stock for metro lines currently under construction, including not only MCD-3 and MCD-4 but also Moscow Metro’s 70km Big Circle Line (BCL), expected to open in early 2023.

The first two MCD lines, MCD-1 from Belorussko to  Savyolovsky and MCD-2 from Kursko to  Rizhsky, were opened in 2019 and carried 100 million passengers during their first nine month of operation. MD-3 will run from Leningradsko to Kazansky and MD-4 from Kiyevsko to Gorkovsky, with opening of these lines expected in 2023-24.

“Rolling stock renewal is an important part of the work on the new MCD-3 and MCD-4, both of which will be launched on behalf of the Moscow mayor, Mr Sergey Sobyanin, beginning in 2023,” says the deputy mayor of Moscow for transport, Mr Maksim Liksutov. “Infrastructure loans make it possible to actively renew rolling stock for new transport arteries.

“This important decision not only contributes to the development of the rail framework of the Moscow region but also makes it possible to develop the national economy. This is significant support for Russian manufacturers, enabling them to secure new orders and preserves their jobs.”