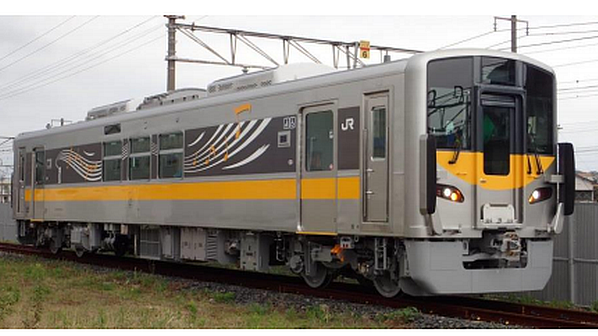 Announced in late-June, the stainless steel DEC700 is built by Kawasaki and will be used to evaluate the planned standardisation of future fleets of DMUs.

JR West says standardising its fleet including diesel, electric and hybrid trains will improve safety, stability and comfort as well as the maintenance practices.

The DEC700’s design is similar to the JR West class 227 EMU delivered from 2014 and used in the Hiroshima region.

Initial testing will include basic performance characteristics, as well as how the train operates on gradients. Ride quality will also be assessed.

These tests will be carried out through the rest of the year, after which the train will be fitted with 15.2kWH lithium-ion battery pack. JR West plans to undertake tests of a hybrid version of the DEC700 in the next fiscal year.