THE first of 34 G1 metro trains for operation on Line U1 of the Nuremberg U-Bahn has been presented to Nuremberg Transport (VAG) by Siemens. 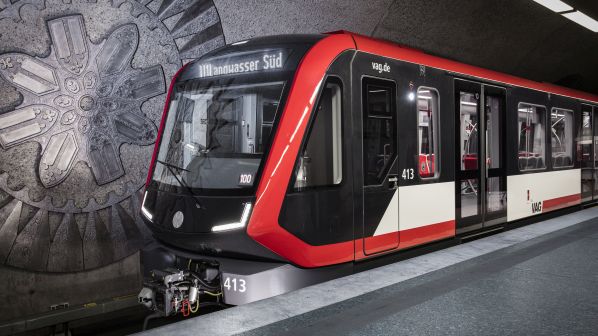 The four-car trains will replace 42 DT1 two-car sets, which have been in operation since the mid-1970s, 12 DT2 trains dating from the 1990s, and will increase the total fleet size on Line U1.

VAG initially ordered 21 G1 trains and later exercised options for an additional 13 trains. The total value of the contract is €263.2m.

The aluminium, articulated trains are 75m long and have seats for 128 passengers and room another 476 standing passengers.

These are the first trains in Nuremberg to have air-conditioning. They also feature screens displaying real-time information, news and entertainment, along with CCTV.

Each set of sliding doors is 1.4m wide, which is 100mm wider than on the existing trains. A retractable plate bridges the gap between the train and the platform at stations to provide barrier-free access for disabled passengers.

LED strip lights both inside and outside the train indicate green when it is safe to board and alight from the train, and red when the doors are about to close.

Line U1 is 18.5km long with 27 stations and is the oldest line on Nuremberg’s three-line network.

For more information on metro train orders around the world, subscribe to IRJ Pro.