Manufacture of the fleet for ČD will begin next year once testing of the first three trains has been completed. 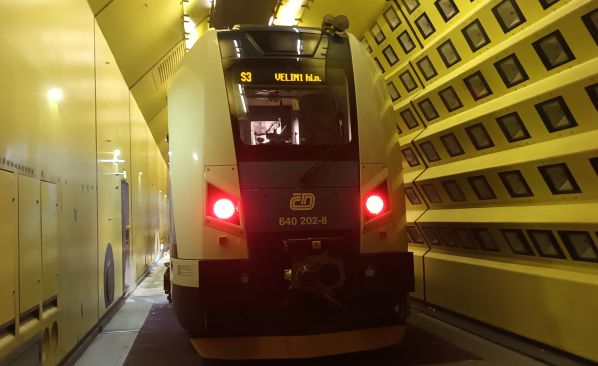 The RegioPanter EMU inside the wind and climate tunnel at Rail Tec Arsenal in Vienna.

THE first three pre-series RegioPanter EMUs built by Škoda Transportation for Czech Railways (ČD) are currently undergoing testing at the Velim test track in the Czech Republic and the wind and climate tunnel at Rail Tec Arsenal (RTA) in Vienna in preparation for production of the remaining fleet of 57 three-car EMUs next year for delivery in 2023-24.

ČD originally ordered 29 of the 20EV trains and subsequently exercised an option for another 31 EMUs in December 2021, bringing the total value of the contract to around €400m.

IRJ was invited to Vienna to see the train undergoing its three-week climatic and wind tunnel tests. RTA can test trains at temperatures ranging from -25oC to +60oC at wind speeds of up to 250km/h and under full sun or no sun, heavy or light rain, frost and wet, hard or dry snow conditions. ČD only requires its train to be tested at between -25oC and +35oC and at up to 160km/h.

While the actual testing is undertaken for 24 hours per day on six days per week and takes three weeks to complete, it takes about one month to install the sensors on the train and a further two weeks to remove them. Slots in RTA’s large climate tunnel, which is used for main line trains, must be booked three years in advance, while the small tunnel for LRVs can be reserved 18 months in advance. Testing of the RegioPanter EMU at RTA will cost around €1m but enables all types of climatic conditions to be simulated.

“The advantage of using RTA is that we can select the criteria and parameters which are important for where the train will be used,” says Mr Michal Jarolím, head of Škoda Transportation’s air-conditioning and ventilation systems department. ČD set the parameters for this test campaign at RTA.

The Škoda train was fitted with 30 sensors which can measure air flow and temperature horizontally and vertically at different heights. Special devices are placed on the seats to simulate passenger body temperature. The sensors are installed in different parts of train such as the door area, the first and second-class saloons, the toilets and the cab.

The tests at RTA cover the air-conditioning, the train door systems, the functioning of the horns and the lights.

These are the first Škoda EMUs to be fitted with heating, ventilation and air-conditioning (HVAC) equipment supplied by Boll, a Škoda subsidiary. The Boll HVAC has an improved internal heating system and diagnostics and in future will be able to use a heat pump. The heating can be adjusted between the HVAC and the under-seat electric heaters.

The HVAC tests are being conducted in three groups. One covers various design points or extreme conditions from maximum winter conditions and speed to maximum summer with maximum passenger load and maximum speed. The second group concerns operation of the train before it enters passenger service. This measures the time that the train needs to reach ambient temperature for operation in in both winter and summer. The third group of tests are conducted at -5oC, zero, +5oC and 28oC to check if the train can remain in a stable condition at different speeds with or without sun.

“We can test the performance of the brakes, pantograph and doors in different conditions, and we change the temperature up or down by 5 Kelvin,” Jarolím says.

Individual tests range from 1 hour to 90 minutes. A report containing all the values for the test is produced which is then evaluated by RTA staff.

The new trains have a lightweight transmission system supplied by Wikow, and Dellner couplers which are backwards compatible with previous generations of RegioPanter EMUs. The floor has been designed to reduce vibrations.

The trains have low floors between the bogies for wheelchair access and 1.5m wide double-leaf doors. A large toilet is provided for passengers in wheelchairs and there is room to accommodate 15 bicycles on each train.

The trains are dual voltage to run on lines electrified at 3kV dc or 25kV 50Hz ac and have an output of 2MW.